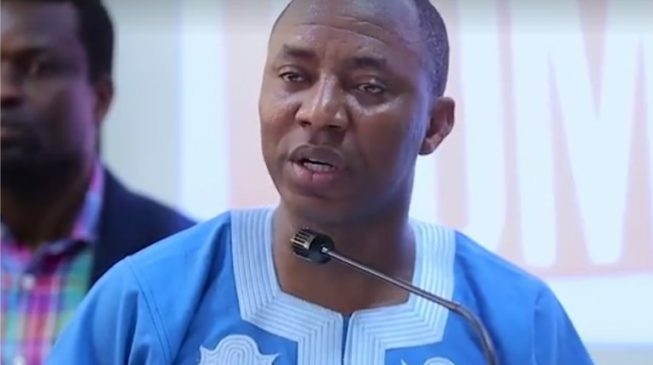 The Presidential Candidate of the African Action Congress (AAC) Omoyele Sowore, has said he would scrap either of the chambers of the National Assembly to effective governance if elected next month.

NewsOnline reports that Sowore said the cost of running the Red and Green chambers of the National Assembly has to be put down by scrapping either of the chambers. He maintained that Nigeria needs to cut down its cost of governance to have the needed fund for healthcare and education development.

Sowore said this on Wednesday while speaking at ‘The Roundtable’ organized by punch aimed at proffering solutions to Nigeria’s problems.

He insisted that running a bicameral legislature is too expensive for a country with 133 million people living in poverty.

“It is my legislative agenda and transformation agenda to cut down the cost of business and that the Nigeria Senate or the House of Representatives (will be scrapped); we do not need a bicameral legislative system because it is too expensive,” he said.

The AAC candidate backed his stand by referring to the statement of President Buhari who said during the signing into law the 2023 Appropriation Act that the national Assembly added trillions into the bill submitted for assent.

“And as I was dropping that joint, our President, Muhammadu Buhari, claimed that our legislators added some trillions, I’m not sure about the exact figure, but they padded the budget.

“I then said to myself and according to advice from other people that have listened to this brilliant idea, maybe not the Senate should be cut off but the House of Reps. We should be able to do ok with just the Senate, with 107 members. They can adequately represent the constituencies in Nigeria and check the government.”

Sowore added that he is committed to solving issues that have hindered the development of the country. He said if elected he would provide employment opportunities for youths mostly in technology, address issues affecting education and healthcare.