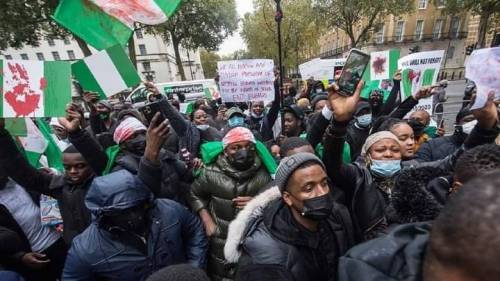 President Buhari Is Currently Under Attack In UK Hospital As Nigerians Storm His Residence And Demand His Return Home.

NewsOnline Nigeria reports that a crowd of Nigerians in the United Kingdom have stormed the Abuja House, 2 Campden Hill, Kensington, London, demanding that President Muhammadu Buhari, who is currently on medical leave, immediately return home.

In a video tweeted on his verified Twitter handle, a Nigerian broadcaster and former presidential aide, Reno Omokri, said the protesters assembled with a mission “to chase the president back home.”

“The Police came but the #HarassBuhariOutOfLondon went on. A frightened @MBuhari refused to come,” he tweeted.

In a separate tweet earlier, Reno said, “The eagle has landed to harass the ego out of London. It is happening people. #HarassBuhariOutOfLondon is on. God willing, I will see you at Abuja House, 2 Campden Hill, Kensington, London W8 7AD by 12 noon.

#BREAKING Nigerians in the UK are now at the “Abuja House” residence of @mbuhari protesting against his medical tourism and try to chase out of the UK. #BuhariMustGo #RevolutionNow pic.twitter.com/QsgPuw9mG2

“We will observe #COVID-19 protocols even as we chase @MBuhari back home”.

Recall that the president on Tuesday departed Nigeria for the UK to undergo a medical check-up.

Human rights activist, Omoyele Sowore, had also on Tuesday advised Nigerians in the UK to occupy the London hospital where President Buhari plans to have his medical checkup.

Sowore had described the medical trip to London as a waste of resources, noting that the President should do his checkup in the “world-class” hospital he built in Nigeria since he came to power.

The human rights activist also advised Nigerians in the UK to occupy the Abuja House in London.

He wrote on Twitter, “Nigerians in the UK must #occupy the hospital where sickly @mbuhari is wasting Nigeria’s resources and the Nigeria embassy as well as Abuja House in London, let Buhari return home and do a medical check in the ‘world-class’ hospital he built since coming to power. #Buharimustgo!”

The Police Came But The #HarassBuhariOutOfLondon Went On. A Frightened @MBuhari Refused To Come Out pic.twitter.com/52NAEfFf0T

Meanwhile, Former presidential aide, Reno Omokri, has alleged that the Nigerian government asked the police in London to arrest him for demanding the president’s return to Abuja.

Some Nigerians had earlier in the UK on Friday took it upon themselves to demand President Muhammadu Buhari be made to return to Abuja immediately.

A key face in the group, who is also a former presidential aide during the administration of President Goodluck Jonathan, Reno Omokri said in the video that he is proud of Nigeria as a country but he is not proud of the country’s leaders.

Moments later, Omokri on his Twitter page, shared a photo of himself being escorted to the protest ground by the London Police after he was interrogated.

He alleged that President Buhari’s people had asked the police to arrest him but that he was let go after the police established that he and other protesters had broken no law.

He tweeted: “General Muhammadu Buhari’s people called the police on me. I was questioned and let go, the #HarassBuhariOutOfLondon. The police established that we had broken no laws and we were observing proper #COVID19 protocols. This government’s attempt to stop failed big time! “

General @MBuhari’s people called the police on me. I was questioned and let go, the #HarassBuhariOutOfLondon. The police established that we had broken no laws and we were observing proper #COVID19 protocols. This government’s attempt to stop failed big time! #BuhariTormentor pic.twitter.com/Rax3LDewgD