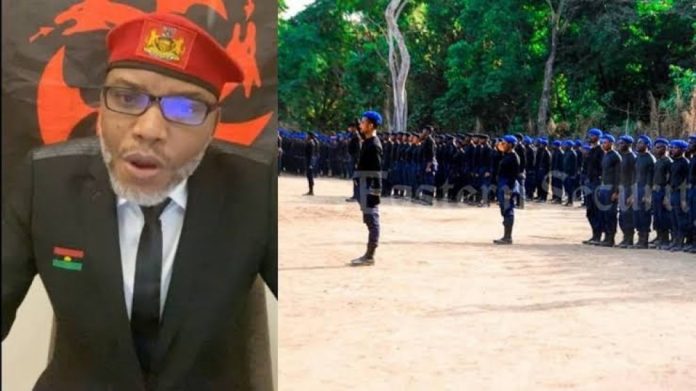 NewsOnline Nigeria reports that the Indigenous People of Biafra (IPOB) led by Nnamdi Kanu, has said it would send officials of the Eastern Security Network (ESN) otherwise known as Biafra soldiers to protect their kinsmen and kinswomen in Benue State, northcentral Nigeria.

According to a report by IDOMA VOICE, Nnamdi Kanu was quoted to have said that the decision to send the Eastern Security Network (ESN) otherwise known as Biafra soldiers to Benue State became imperative following the worsening insecurity situation in the state.

Kanu stressed that if the killing continues, he would have no choice than to deploy operatives of Eastern Security Network (ESN), to the Benue state.

In a statement by Emma Powerful, the spokesman of IPOB, Nnamdi Kanu said: ”It has become very imperative that we the Indigenous People of Biafra (IPOB), ably led by Mazi Nnamdi Kanu, bring to the attention of Gov. Samuel Ortom of Benue State how Fulani terrorists masquerading as herdsmen are terrorizing Igbo communities in his state. The unprovoked genocidal attacks by these murderous bands have intensified in the last one week.

“The world has to be aware of this atrocity which has persisted obviously because the Governor failed to rise to his responsibility of protecting lives and property of these innocent Igbo communities in his state.

“Benue State Governor Samuel Ortom must take responsibility for securing these communities or IPOB would move in our gallant Eastern Security Network, ESN operatives to do the needful.

“WE CAN NEVER ALLOW FULANI TERRORISTS TO DECIMATE ANY BIAFRAN COMMUNITY. WE WILL NO LONGER TOLERATE ANY UNPROVOKED ATTACK AGAINST OUR PEOPLE IRRESPECTIVE OF WHERE THEY RESIDE. GOV. ORTOM MUST ACT NOW OR ESN WILL RISE TO THE OCCASION! ESN WILL LAUNCH A SERIOUS OPERATION TO CHASE THE KILLER FULANI OUT OF BENUE IF GOV SAMUEL ORTOM CANNOT PROTECT IGBO BIAFRANS LIVING IN BENUE.

“The Benue government must as a matter of urgency ensure that the Chief of Ataloga and others abducted are released , and no harm befalls them , otherwise, ESN will unleash its venon in the state against the Fulani.

“Based on our findings, the worst hit of Fulani herdsmen attack is Ataloga community where men in military uniform kidnapped three innocent locals. The victims include Chief of the community, Mazi Boniface; IPOB Coordinator and the youth leader of Ndigwe community. Others including Chief Simon Nweke from Ndiighe in Ado LGA; and Patrick Nweke, Youth President of Ndiighe in Ado LGA.