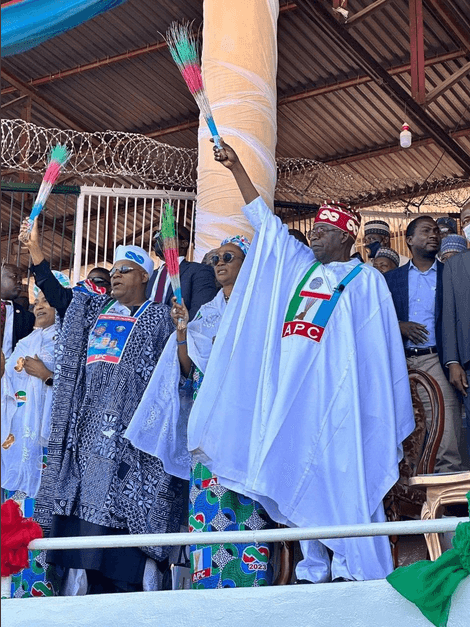 The presidential candidate of the ruling All Progressives Congress (APC), Bola Tinubu, has called on Nigerians to vote for his party in all the electoral positions across the federation to end insecurity and hardship.

NewsOnline reports that Bola Tinubu said the ruling party which has been in government for 7 years is committed to ending corruption in the country.

The former Lagos State governor said this on Tuesday, at his presidential campaign rally in Ilorin, Kwara State.

Tinubu said under his leadership, Nigeria will experience economic boom, security and an end to corruption. He promised that youths will be trained in ICT skills to compete internationally and get well-paying jobs. He added that his committed to addressing issues of out-of-school children and education generally.

The APC presidential candidate said farmers will be able to go to farm if his elected as the president of the country on February 25.

“Sweep away fraud, corruption and insecurity with your brooms in the forthcoming election.

“Today, we are just celebrating freedom. We are re-assessing and re-asserting our freedom in democracy.

“Yesterday, they never believed that today would happen, but it is happening in your lifetime. We thank you for believing in AbdulRahman AbdulRazaq – Kwara State governor. He knows how to behave. He is a very honest and genuine, hardworking man.

Also, the national chairman of APC, Abdullahi Adamu, said the APC government led by President Muhammadu Buhari is delivering on the promises made to Nigerians in 2015 and 2019.

Adamu said under APC government security has improved. He added that infrastructural development has helped in building the economy. He said if APC is elected under Tinubu, he would continue with the legacies of Buhari administration.