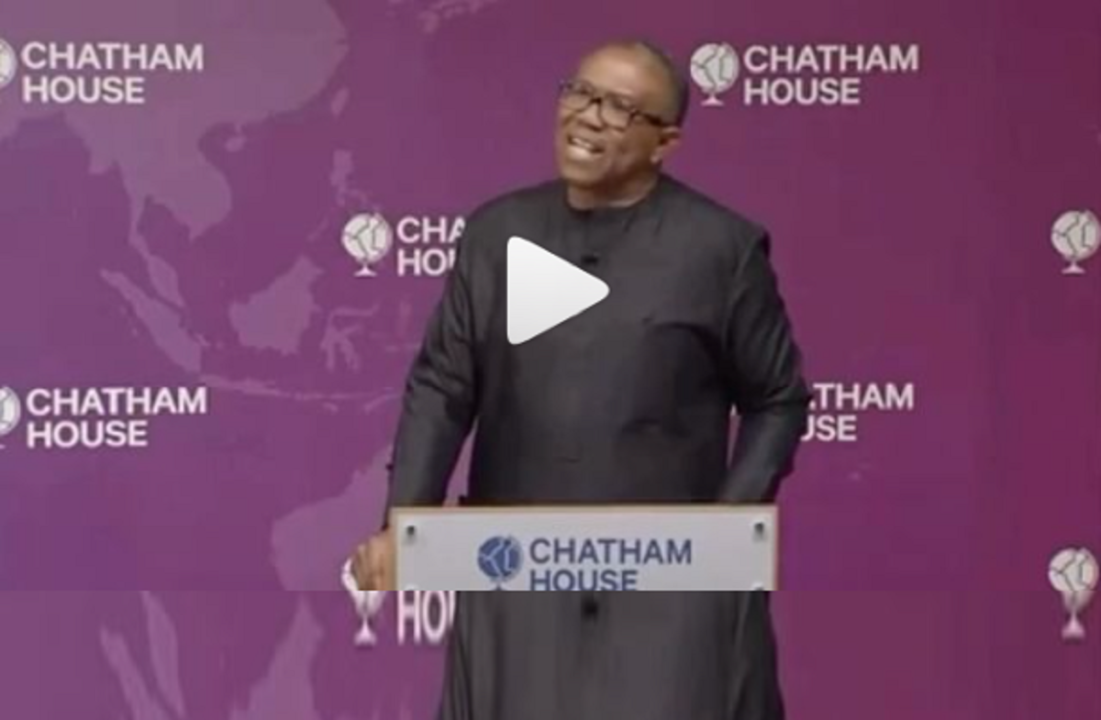 Peter Obi vowed to dismantle APC and PDP structures of criminality during his presentation at Chatham House.

NewsOnline reports that the Labour Party (LP) presidential candidate, Peter Obi, has said that if elected President of Nigeria in the February 25 election, his government will dismantle inefficiency in governance.

This online newspaper understands that Peter Obi, who was a guest of Chatham House, the famous British international think-tank and Policy institute, said with him and Yusuf Datti Baba-Ahmed in charge of governance, they will dismantle inefficiency and eliminate transactional policies that breed corruption in government.

Obi, during the engagement, which was monitored in Abuja, took over 15 questions from the audience after presenting a paper on various issues.

He said they will dismantle the structure of criminality, which is being used to hold the country to ransom.

“There will be no sacred cow,” Obi said of what will happen under the Obi-Datti administration.

The Labour Party presidential candidate also said: “our objective is to dismantle these structures of criminality and enthrone competence, character, and capability so that talents and ideas can flourish.”

On how he intends to cope with possibly having a National Assembly that may be dominated by members of other political parties, Obi said he went through such experience as Governor of Anambra State when none of the 30 members of the State of Assembly came from his political party, adding that what he needed to navigate such case was to do the right thing, avoid nepotism and transactional policies, because even the parliamentarians desire good governance.

Responding to a question on the outlawed Indigenous Peoples of Biafra (IPOB) and why he has not condemn the militant group, Obi said that for him and many other reasonable Nigerians including Igbos, the Biafra war ended 53 years ago, adding that he was not oblivious of the agitators’ demands for justice.

According to him, “we are going to look into the issue of justice and marginalization which some of them are hinging their grievances.

“We are going to apply the carrot and stick in dealing with the agitators. But in the end, there can only be one government and we will be in charge.”

On security, he said it will be his top priority because everything will be done to secure the environment and he will do this by first turning the country into production and pulling people out of poverty and adequately utilizing the nation’s military.

Obi noted: “Our military once secured Africa and they should secure Nigeria and we will provide the needed leadership and political will.”

He also answered questions on the independence of the Central Bank of Nigeria (CBN), saying that what is happening in the apex bank now was a consequence of mix-up of responsibilities and not necessarily of competence, a situation he assured his administration will correct by ensuring that square pegs are in square holes both in personnel and policies.

Obi also said that the on-going fiscal rascality in the system will be dismantled and order and discipline injected into the country’s monetary policies.

On how to navigate the so called ‘big boys’ to be able see through his beautiful policies if elected, the LP standard bearer said the challenge will be surmounted as there will be no sacred cow.

The former Anambra state Governor also provided convincing answers to questions on education, health, debt servicing, among others, to win the consistent applause from the audience.

Chatham House: I Will Declare War On Electricity – Peter Obi

‘Politics Not About Fighting Opponent’ – Jonathan Express Worry Over Election