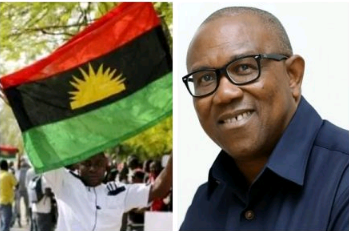 Peter Obi said if elected his government will not support the agitation of Biafra.

NewsOnline reports that the presidential candidate of the Labour Party, Peter Obi says he is running for the office of the President of the Federal Republic of Nigeria as a Nigerian.

Obi said he is not contesting to support the agitation of the sovereign state of Biafra which is popular among some sections of the South East region.

He also revealed that agitation for self-determination happens in Nigeria because of injustice suffered by people, but affirmed he will dialogue with aggrieved groups if elected as the nation’s president.

The former Anambra state governor made this known in an interview with Brekete Family Show in Abuja on Monday.

Obi, in his reaction to the question of Biafra agitation, said, “Biafra war ceased to exist about 52 years ago and it remains so. I am a Nigerian. I am contesting as a Nigerian.”

“I said I will consult and discuss with all of them (agitators). A new Nigeria is what I want to build and people will be proud. That’s why I said, I will solve the problems of the North, and South-West. I want Nigerians to move around with their passports proud that they are Nigerians,” Obi said.

Tinubu Promises To Turn Yobe State Around If Elected