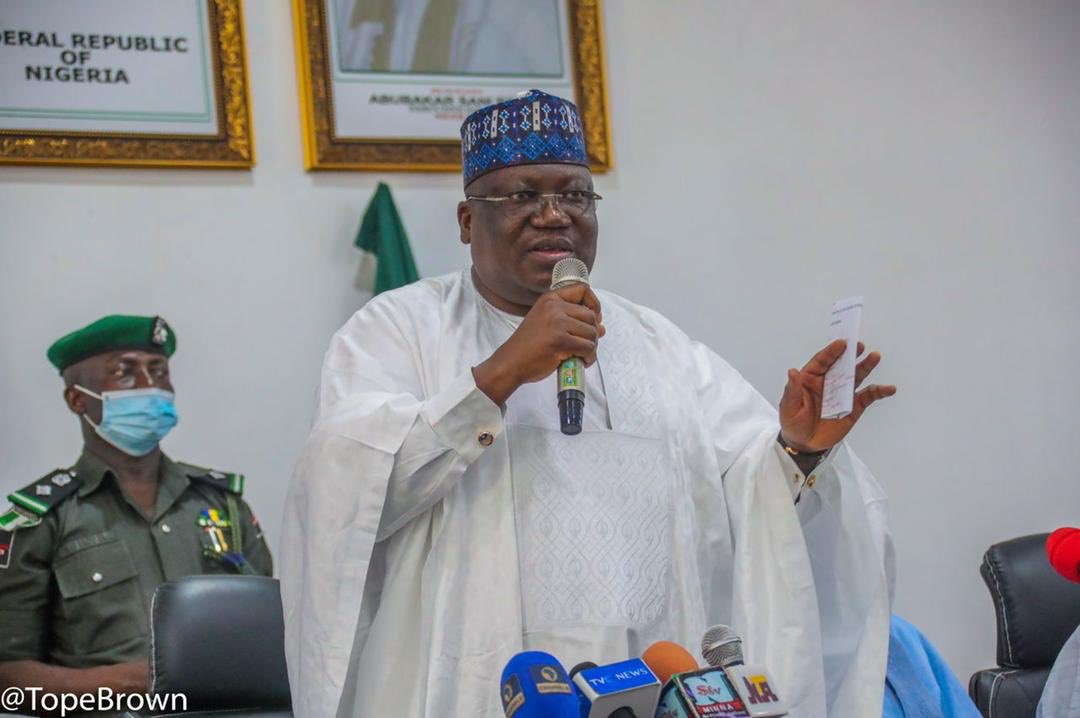 The President of the Senate, Ahmad Lawan, has asked President Buhari to provide the Northern states with N300 billion for livestock support as parting gift before he leaves office in May.

NewsOnline reports that the Yobe North senator said the argument that livestock business is a private business cannot stand since the federal government through AMCON takes up the liabilities of banks even though banks are private businesses.

Ahmad Lawan on Monday in Damaturu, Yobe State at a State Banquet held in honour of President Buhari on the first day of his two-day official visit to the state, said if the government can support banks that are private businesses, it should make out provisions for livestock supports since it supports families across the Northern region.

Lawan assured the president that the legislature will support his efforts from him to actualize that the funds are raised to support livestock before May 29, 2023.

READ ALSO: I WILL DO ANYTHING POSSIBLE TO DELIVER YOBE TO TINUBU – LAWAN

He said, “Mr. President, when you said you will support the livestock industry, some people said it’s private business. They shouldn’t be supported.

“There is nothing more private than someone setting up a Bank, kill the Bank and then the obnoxious loans will now be taking over by AMCON. AMCON today has about six trillion naira of toxic loans on our head.

“Mr President, the livestock industry in Nigeria especially between Borno, Sokoto and of course Yobe is an economy that is worth 33 trillion Naira.

“Incidentally, the most poor states are in this zone. Where you have a potential of 33 trillion Naira economy, we have no reason to be poor. Mr President, I want to urge you that before you leave, let’s deploy some resources to develop the livestock industry.

“We in the National Assembly will support you because we believe that our livestock industry can give us a lot more economic stability because our people will benefit economically and infact can be another source of billions of revenue generation in Nigeria.

“So on behalf of those of us from this part, from Borno to Sokoto and indeed up to Rivers because almost every part of Nigeria has some livestock, Mr President, let’s devote some resources. I don’t know how we can get it, but about 300 billion naira can do some magic.”

The senate president added that all Northern states are ready to provide lands for grazing reserves. He said states outside North that are interested in providing grazing reserves should be supported, but no state should be forced to donate its land.

“Our state, the Yobe State is always ready to provide land for grazing reserve and whatever. Any state that desires to participate in the livestock development, Federal Government should support that state. Any state that doesn’t want, let that state stay away.

“But we shouldn’t deprive states that are prepared to work with the Federal Government to develop the livestock industry in Nigeria,” Lawan added.

While livestock is the second request made by the senate president, he at first demanded from the president as a parting gift, the establishment of Gum Research Institute in Yobe State.

He said as an industry that has the potential to provide foreign exchange, more revenues for the government and protect the environment, Buhari should assist in making the dream come through for Yobe State before he leaves office in May.

Lawan said: “Mr President, we have seen so much development in Yobe State during your tenure. Infact, Yobe never had it so good and we are very grateful.

“We have gotten appointments. You can see the high calibre Inspector General of Police and this IG of Police portrays what Yobe can do. Mr President, we still have some of our best still on the line waiting.

“Mr President, Yobe State, like Borno, Jigawa, Kano, Katsina, Zamfara, Kebbi, Sokoto, is on this Gum Arabic Zone. Gum Arabic is a cash crop that gave support to our people before. It is no more giving that support.

“Mr President, if there is one way that we can diversify our economy, Gum Arabic should be given a special position in our administration.

“And I want to say that this belt, from Borno to Sokoto, if we work on the Gum Arabic industry, we are going to earn foreign exchange for Nigeria.

“We spent billions of Naira, hundreds of millions of dollars to import Gum Arabic from other countries. We can do a lot more if we can get the support of Federal Government.

“Mr President, my belief is that Gum Arabic has that important economic value that deserves its separate research institute because it can transform our country.

“So on behalf of all our people and on behalf of other states, Mr President, I want to urge that before you leave on 29th of May, 2023, let us see how we can make the sub-station in Kajuwa to be the headquarters of the new Gum Arabic Research Institute.

“I believe that that kind of institute will now take a dimension that will support our economy and of course, maybe a consequential result of protecting the environment as well.”

The Senate President, Ahmad Lawan said that the ninth National Assembly has achieved so much, collaborating with President Muhammadu Buhari’s government.

Lawan said the Assembly had passed many difficult and complicated legislations because President Buhari gave them all the support they needed to do their work.

Lawan said: “Your Excellency, today by the Grace of God, it is almost three and half years that I have been working with you as Senate President.

“In all my years in the National Assembly, I have never worked with any President who never asked that he wanted things done a certain way but I want to admit here that Mr President, you have never asked me to do anything. You believe we should do what is best for our country.

“And when I said that we will continue to work with the executive arm of government, ensuring that the national interest is always our guide and focus, our opposition took me out of context.

“Some of them started writing that we are rubber stamp, that whatever is brought to National Assembly will be approved. I want to say here, that President Muhammadu Buhari never asked anything that is not in the national interest.

“And that is why we believe that we should continue to work with him.We should support him.
“And in the ninth National Assembly, we have supported the executive arm of government fully because we believe this is one President, one administration, one government that has come to deliver Nigeria, from what happened in 16 years, from mis-governance by, of course, the PDP.

“Today, Mr President, I am proud to say that we have achieved so much working with you in the ninth National Assembly.

“We have passed the most difficult Bills, we have passed the most complicated legislations. This is because you gave us all the support that we needed to do our work in the National Assembly.”
Lawan thanked the President for making Yobe State to witness so much development during his tenure.”