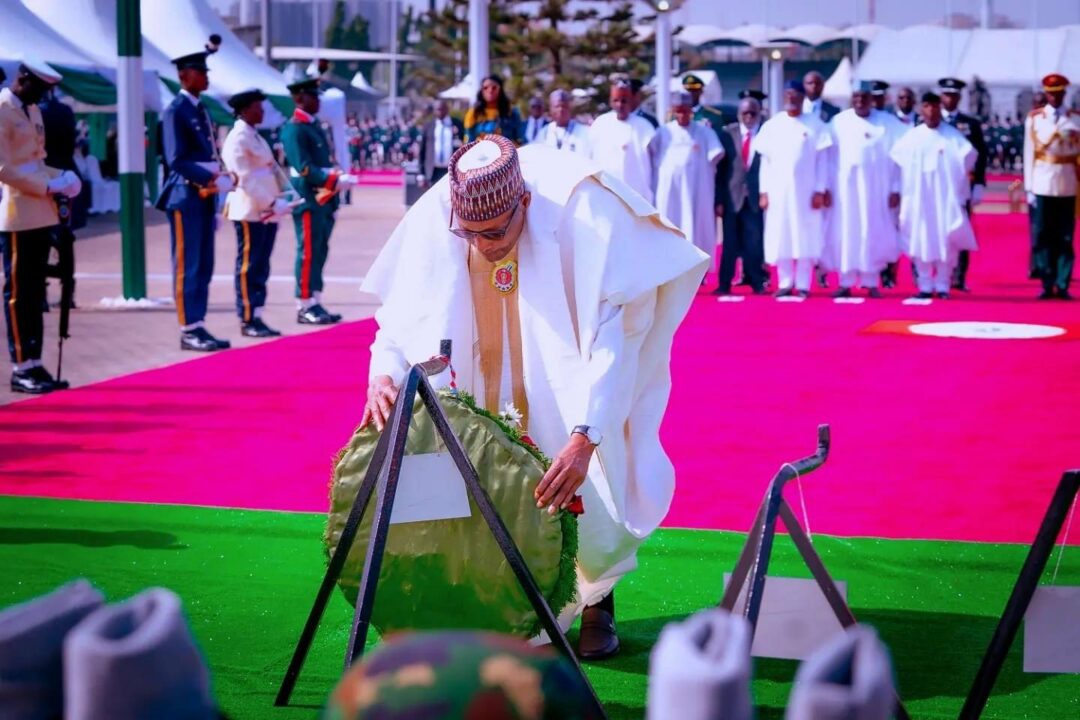 NewsOnline reports that President Muhammadu Buhari, on Sunday, led other senior members of the government to the National Arcade in Abuja to participate in the Wreath Laying Ceremony, marking the climax of the 2023 Armed Forces Remembrance Day celebration.

The President, who arrived at the National Arcade, Abuja, at 10:05 am, was immediately ushered onto the saluting dais for the National Salute.

Buhari, who inspected the Guards of Honour, accompanied by the Commander, Brigade of Guards, Major General Muhammad Takuti Usman, later proceeded to the Cenotaph for the Wreath Laying Ceremony.

After the President, other dignitaries that laid wreaths were Vice President Yemi Osinbajo; the President of the Senate, Dr Ahmad Lawan; the Speaker of the House of Representatives, Femi Gbajabiamila and the Chief Justice of Nigeria, Justice Olukayode Ariwoola.

Others who laid wreaths included the Ministers of Defense retired Major General Bashir Magashi; Federal Capital Territory (FCT), Mallam Muhammed Musa Bello; the Chief of Defense Staff, General Lucky Irabor and the service chiefs and as well as the Inspector-General General of Police, Usman Alkali Baba; representatives of members of the Diplomatic Corps; and the pair of the Chairman of the Nigerian Legion and a widow of a fallen officer.

President, who also performed the symbolic freeing of white doves out of the cage during the event, had the 2023 wreath-laying ceremony as his last as Commander-in-Chief.

Also in attendance were members of the Federal Executive Council, including the Secretary to the Government of the Federation, Boss Mustapha; the Chief of Staff to the President, Professor Ibrahim Gambari; the National Security Adviser (NSA), retired Major General Babagana Monguno and Permanent Secretaries amongst others.

You Are A True Father – Gov Adeleke Commends President Buhari