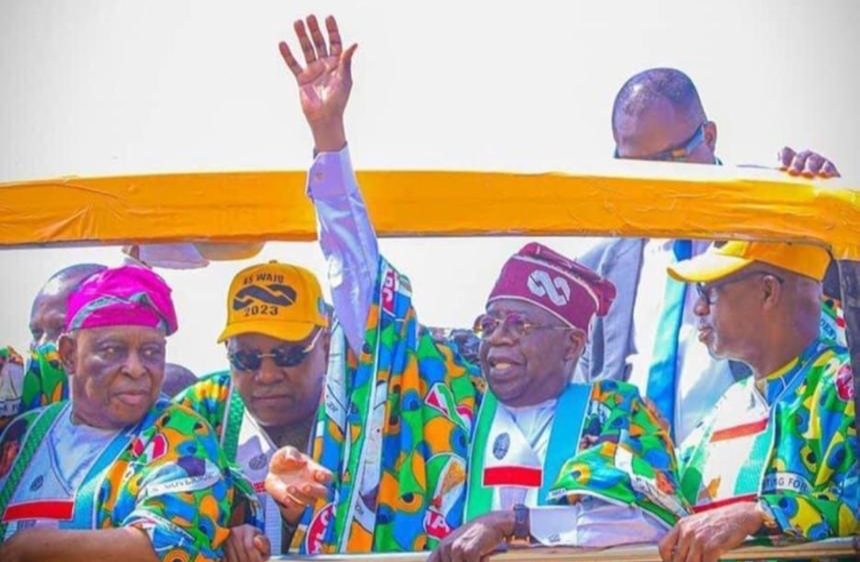 Tinubu has alleged FG plans to scuttle the 2023 general elections through a fuel scarcity and naira redesign.

NewsOnline reports that the Presidential Candidate of All Progressives Congress, APC, Bola Tinubu, on Wednesday, accused the federal government of using the lingering fuel scarcity and recently-introduced naira notes and cash handling policies of the Central Bank of Nigeria (CBN) to scuttle his chances of winning the 2023 presidential election.

The former Lagos Governor, however, vowed that Nigerians would defy the fuel scarcity and trek to cast their votes.

“You’re hoarding fuel and hoarding the naira,” Mr Tinubu said during a campaign stop in Abeokuta this afternoon. “Still, we will vote, and we will win this election.”

READ ALSO: ‘Obi Is My Tenant In Lagos, You Owe Me Votes’ – Tinubu Tells Abia Supporters

“Whether you change the ink of the naira or spend money till you are in debt, things won’t turn out as you hope, we are the ones who will win the election, and our opponents will fail,” Mr Tinubu said.

He said the forthcoming polls would be a superior revolution.

“They don’t want this election to hold. They want to sabotage it (elections). Will you allow them?”, Tinubu asked the teeming supporters at the rally, to which they responded “No.”

He, however, vowed that Nigerians would defy fuel scarcity and trek to cast their votes.

Tinubu vowed that “we will use PVC to take over the government from them,” just as he pointed out that the forthcoming polls would be a “superior revolution.”

“Relax, I, Asiwaju, have told you that the issue of fuel supply will be permanently addressed. Whoever wants to eat the honey embedded in a mountain won’t worry about the axe. Is that not so? And if you want to eat palm kernel, you would bring stone and use it to break it, then the kernel will come out. It’s not easy to…

“Let them increase the price of fuel, only them know where they have hoarded fuel, they hoarded money, they hoarded naira; we will go and vote and we will win. Even if they changed the ink on Naira notes. Whatever their plans, it will come to nought. We are going to win. Those in the PDP will lose (won ma lule).

“I am homeboy, I have come here, you will not be put to shame, we will take over the government from them, the traitors who wanted to contest with us. They had no experience.

Tinubu was expressing his disapproval over the fuel crisis that has seen long queues across the country, with citizens spending productive hours at filling stations while also paying more to get the crucial commodity.

The CBN also recently announces changes to the national currency and vastly limited amounts that could be withdrawn in a day from bank accounts across the country.