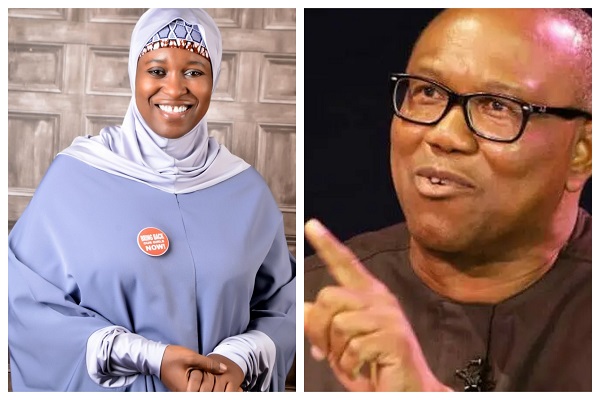 The presidential candidate of the Labour Party, Peter Obi, has addressed concerns and controversies on why he is always with Aisha Yesufu, a popular activist, at all functions.

NewsOnline reports that Peter Obi revealed the reason for his closeness with Aisha Yesufu while speaking on Berekete Family Radio talk show on Monday.

READ ALSO: I WILL DO ANYTHING POSSIBLE TO DELIVER YOBE TO TINUBU- LAWAN

After addressing questions on his plan for the country, Ahmad Isa, went to their social media handles, including Twitter and Facebook to get questions from online followers for Peter Obi to address.

The below conversation ensued:

Obi – I also want to hear negative ones…

Berekete – We are looking for it, that is why I am taking my time…. (Obi interjected)

Obi – Because you learn from negative ones…

Berekete – I am looking for negative ones…. (Obi interjected)

Obi- I also want to hear bad news.. that is why I move around with Aisha (Yesufu)…

The reader of the comments goes to Facebook, the conversation continued:

Berekete – Okay let me go to Facebook, it is possible in Facebook there will be negative comments.

Berekete – Facebook has over 3000 consistent viewers..but we have hit over 3 million viewers of those we have seen jumped in … jumped out and all of that…

After the conversation, the Labour Party presidential candidate said Nigerians should not vote for any candidate who says it is his turn. He maintained that it is the turn of Nigerians who have been victims of bad governance to elect a leader who had character, and competence, and who is trustworthy with a verifiable past to lead the country.

He added that while as Anambra State governor he managed the resources of the state without obtaining loans or owing any contractor, civil servant, or pensioners. He said the saved money for the state because he had solved all the problems that came up at the time he was in office.

We Might Be Force To Cancel, Postpone Polls – INEC Raises Alarm