Popular Northern Politician has been shot dead by unknown Gunmen in Imo State.

The news of his death was made known by his classmate, Dr Umar Ado.

Even though, the statement did not reveal what took him to Imo but unconfirmed sources revealed that he was in Imo on the invitation of some Northern Groups in the state.

News Online gathered that Ahmed Gulak was shot on his way to Sam Mbakwe airport.

“I just confirmed the sad and gruesome death of my friend and classmate, the former Hon. Speaker of the Adamawa State House of Assembly, former Senior Special Assistant to the Vice President and former Special Adviser Political to President Goodluck Jonathan, Barr. Ahmadu Ali Gulak.

“Barr Gulak was said to have been killed last night by unknown gunmen in Owerri, Imo State. May Allah (SWT) forgive his sins, bless his soul and reward his good deeds with Aljannah on the Day of Resurrection.

“May Allah (SWT) also give all his children, relatives, friends and loved ones, the fortitude to bear the irreparable loss. And may Allah (SWT) bless us with faithful deaths when it is our turn to die. Ameen.

“Please let all and sundry accept my heartfelt sympathy over this personal painful experience even as I draw solace that he lived a good, helpful and productive life, well illustrated by the fact that he died while in service of his dear country.

“This is one death too many! May God Almighty save our fatherland. Ameen.”

Also, his daughter confirmed his death via a statement on twitter; 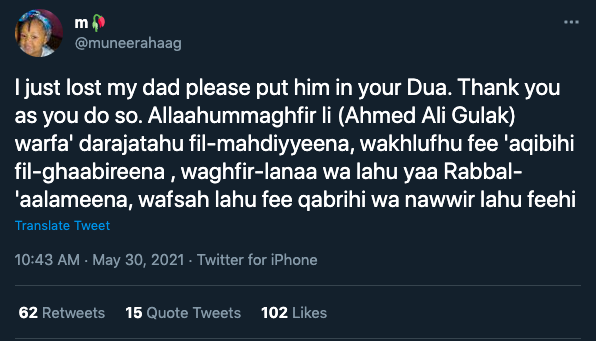