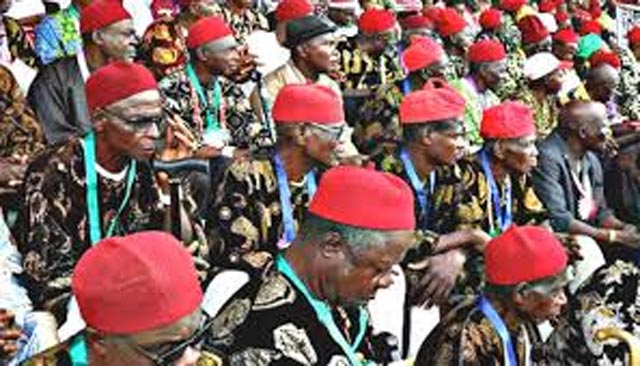 Ohanaeze has sent a strong warning to Buhari Government over the alleged ‘Shoot at Sight Order’ on Igbo Youths.

News Online reports that Ohanaeze Ndigbo Worldwide has strongly warned President Buhari led federal government against an alleged “Shoot at Sight Order” given to the Nigerian soldiers as a way to engage the Igbo youths in the oncoming week.

Reports emerged at the weekend concerning the new secret plan which would commence from Orlu in Imo State, Sothern Nigeria.

This online news platform understands that the Army is yet to react to the said order which has gone viral on various social media platforms.

Reacting to the said order, Ohanaeze Ndigbo described it as “very disturbing”, lamenting the pattern of deployment of northern-Muslim military officers to the Eastern region, which according to the organization, lends credence to the alleged plot to commence ‘Shoot at Sight’ on Igbo youths.

The apex Igbo socio-cultural organisation pointed to the fact that the Nigerian army has posted Northern Muslims as commanders over its operations and brigades in Anambra, Imo, Abia, Akwa Ibom, Enugu, Benue, Edo, Delta and Rivers.

ALSO: Pastor Paul Adefarasin Advises Nigerians To Get Plan B Out Of Nigeria

In a statement signed by Chiedozie Alex Ogbonnia, National Publicity Secretary, Ohanaeze Ndigbo, the President-General of the organisation, Ambassador Prof. George Obiozor, admonished the Nigerian government to “learn a lesson from history by not fighting an unwinnable war against nationalism but seek possible peaceful options that are the only solution that guarantees national unity and peaceful coexistence.”

Obiozor lamented that “Subnational consciousness or ethnocentric nationalism which is a dangerous form of nationalism to national unity has taken over Nigeria.”

The organisation warned that Nigeria’s dream of unity is fast receding and with violence, crises and conflicts across the country.

Ohanaeze Ndigbo said that the problems Nigeria is being faced with are products of sustained orchestrated injustice in governance.

“The problem with Nigeria in general and the Igbo in particular is located in injustice and the simple solution lays in manifest dialogue, equity and justice,” Ohanaeze noted.

Ohanaeze further warned that the current administration that the alleged “Shoot at Sight Order” to “soldiers on Igbo youth is a call for another pogrom and genocide.”

The group demanded that the Federal Government refrain from the use of force in resolving the present national crises.

Obiozor warned: “History shows that military and violent means to solve the national question is bound to fail as it leads to further national fractionalization, anarchy and eventual or inevitable disintegration, as in all Empires or multi-national states or countries.”

With banditry, kidnapping, terrorism and other forms criminalities ravaging the Northern region, the Old Eastern Region is now experiencing its worse state of insecurity.

There have been daily reports on attacks on police formations and other security points and killing of officers by those simply identified as unknown gunmen.

As the attacks on security operatives and police stations in the region continue unabated, over 10 police officers were killed at the weekend in Rivers and Akwa Ibom States.