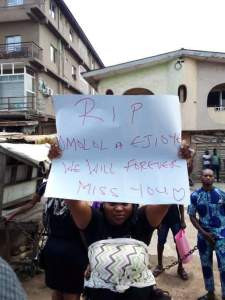 Protest is currently rocking Lagos as a man dies in police custody after an alleged unlawful arrest.

News Online reports that Lagos residents have taken to the streets of Ikorodu to protest the alleged death of one Mr. Ejioye Omolola in police custody.

ALSO: Pastor Paul Adefarasin Advises Nigerians To Get Plan B Out Of Nigeria

It was gathered that the deceased was arrested by the police on Sunday, May 2, around 8 p.m at Ladega area of Ikorodu following a robbery incident in which a commercial motorcyclist was killed.

According to reports, a police team stormed the area after the incident and while people fled from the scene, Omolola, who was with his girlfriend at the time was arrested.

He was detained in Igbogbo Police Station till Tuesday morning, May 4, when his case was transferred to State Criminal Investigation Department, Panti, Adekunle, Lagos State after spending days in unlawful detention.

All efforts by family and friends to secure Ejioye’s release proved abortive. He was said to have died in police custody on May 7, following alleged severe torture by the officers in charge.

A press release issued on Sunday, May 9, by Counsel to the deceased, Yakubu Eleto Chambers, said the family and friends had requested for his administrative bail few days before he died. Read below:

RE: DEATH OF OMOLOLA EJIOYE A.K.A EJI, WHO DIED IN POLICE CUSTODY ON THE 7TH DAY OF MAY, 2021 DUE TO TORTURE AND INABILITY TO MEET ADMINISTRATIVE BAIL CONDITION SET BY ONE SUPOL BOLA AND BABATUNDE OF D4 OF THE POLICE STATE CRIMINAL INVESTIGATION DEPARTMENT, PANTI ADEKUNLE, LAGOS STATE.

A CALL FOR IMMEDIATE INVESTIGATION INTO CAUSE OF DEATH.

We act as solicitors to the family of Late OMOLOLA EJIOYE who died in police custody of the State Criminal Investigation Department, Panti on the 7TH of May, 2021.

Our brief reveals that late Omolola Ejioye was unjustly arrested at Ladega, Ikorodu around 8 P.m on Sunday the 2nd day of May, 2021 where he was whisked in a commando manner and later detained in Igbogbo Police Station in Ikorodu till Tuesday morning when he was transferred to the State Criminal Investigation Department, Panti, Adekunle, Lagos State on the 4TH day of May, 2021.

Our brief reveals further that one Inspector Bisi took him from Ikorodu to Panti and handed him over to one Babatunde in Panti D4 department and the Babatunde collected some amount of money to open a file for the case in Panti.

We were also briefed that the Supol Bola also on Tuesday collected another sum of money from the family to carryout coroner inquest on the person who earlier died in the Okada riders clash in Ikorodu and it should be noted that the deceased was unjustly arrested due to the death of one Okada rider in Ikorodu.

On Thursday the Investigation Police Officer collected another sum of money for mobilisation to Ikorodu to investigate the scene of the death of the Okada rider.

Our client’s family and friends thereafter visited the SCIID Panti where they requested for the release of the deceased on the 5th day of May 2021 but all efforts were to no avail.

Few days before the untimely death of our client, the family and friends further requested for the administrative bail of our client but the police asked them to bring #100,000 (One Hundred Thousand Naira) which they couldn’t produce.

They firmly told the police officer that they had just #28,000 (Twenty Eight Thousand Naira) which the officer on duty rejected and hence denied the deceased bail but the family insisted on seeing the deceased to appraise his health conditions.

Eventually, when the family was able to see him, they noticed he had been subjected to torture by inmates and was already seen soaked with bruises and blood stains.

Our clients on that premise requested for the bail but the Inspector Bola of D4 further denied our clients administrative bail on the night of 6th May, 2021 despite the deteriorating health condition of our client and upon getting to the SCIID, Panti on Friday the 7th day of May, 2021 our clients were told that the OMOLOLA EJIOYE died in the middle of the night. TEARS!!!

While we condemn in all its entirety the facts leading to the death of of Mr Omolola Ejioye, we vowed that this unprofessional act of Inspector Bola will never go unchallenged.

We are therefore forced to make this public in a bid to inform the general public the real circumstance that led to the death of our clients and to serve as deterrent to others.

Having seen clearly that our client died unprecedentedly in the hands of the police, we are hereby requesting for an autopsy report on the cause of the death of our client.

We are also requesting that police release the corpse to the family for befitting burial for our clients and furnish us with the police investigation report.

While we are waiting, we are expecting a press release from the office of the Police Public Relation Officer for Lagos State on the cause of death of Mr Omolola Ejioye. 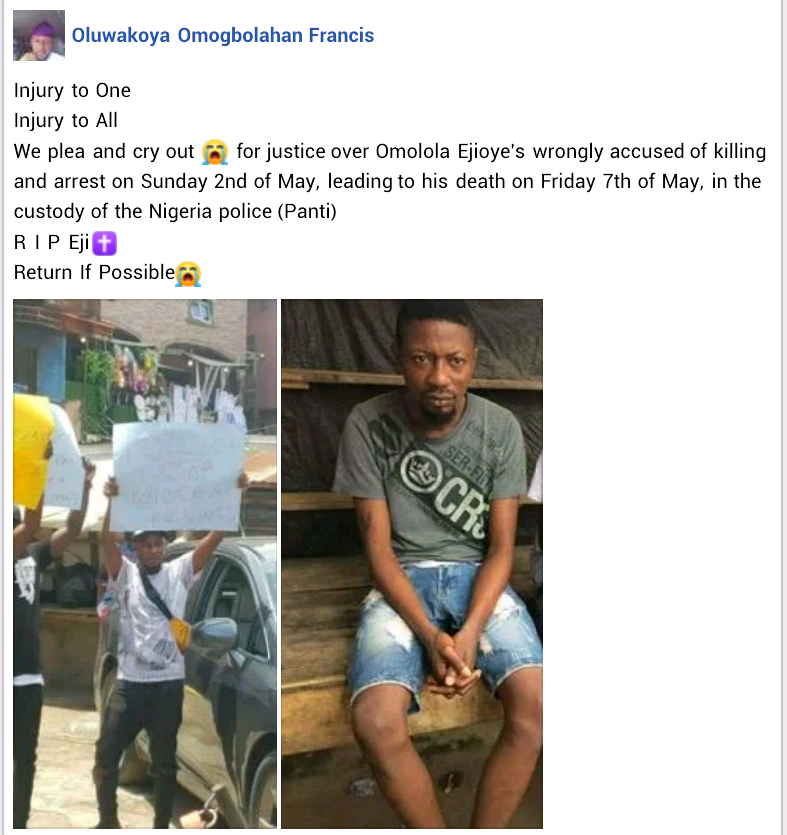 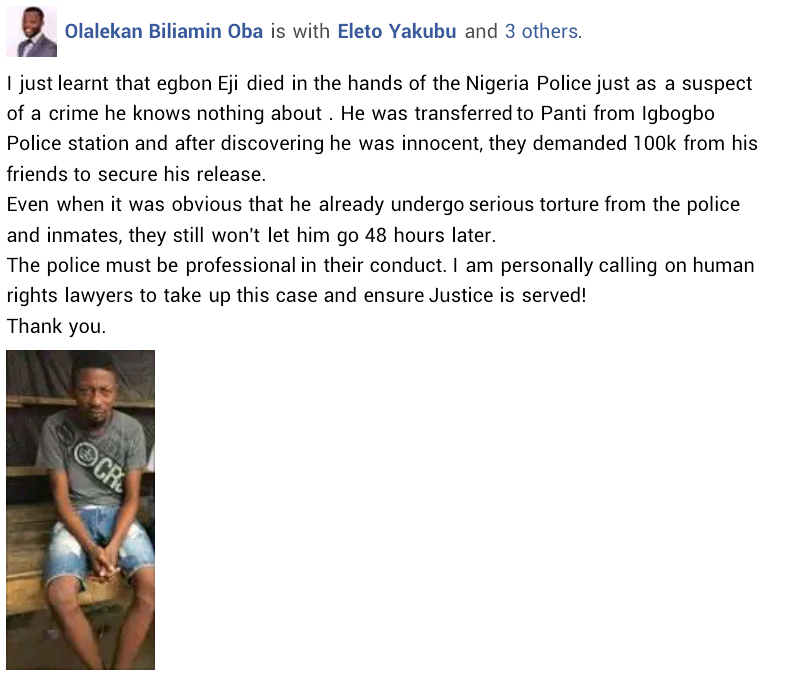 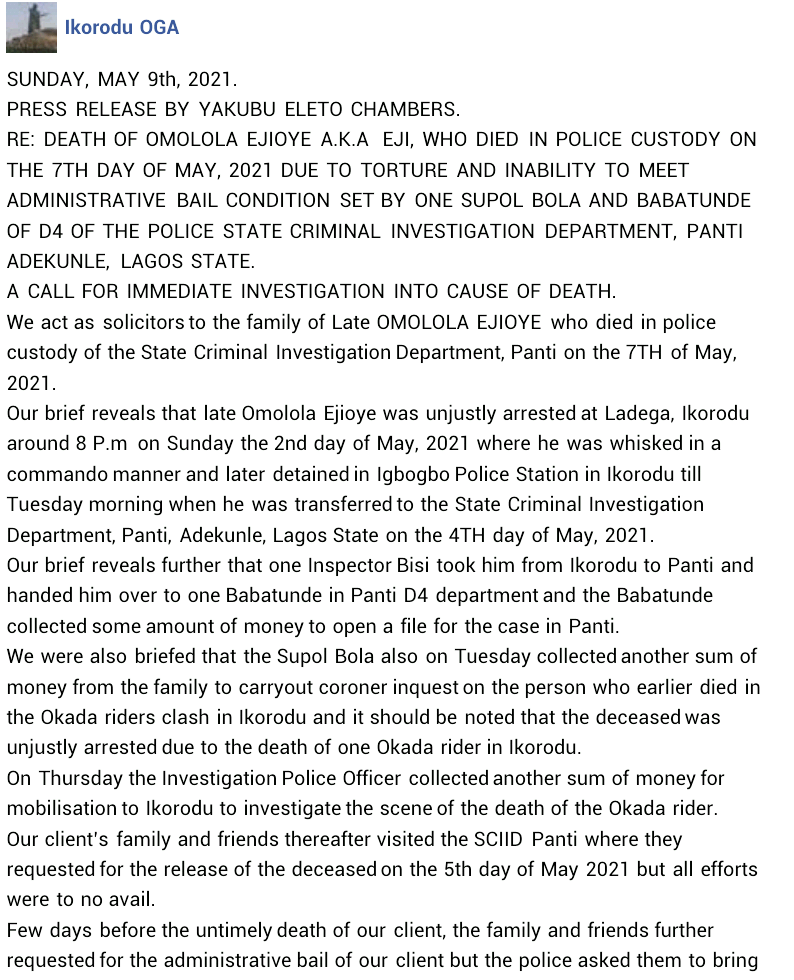 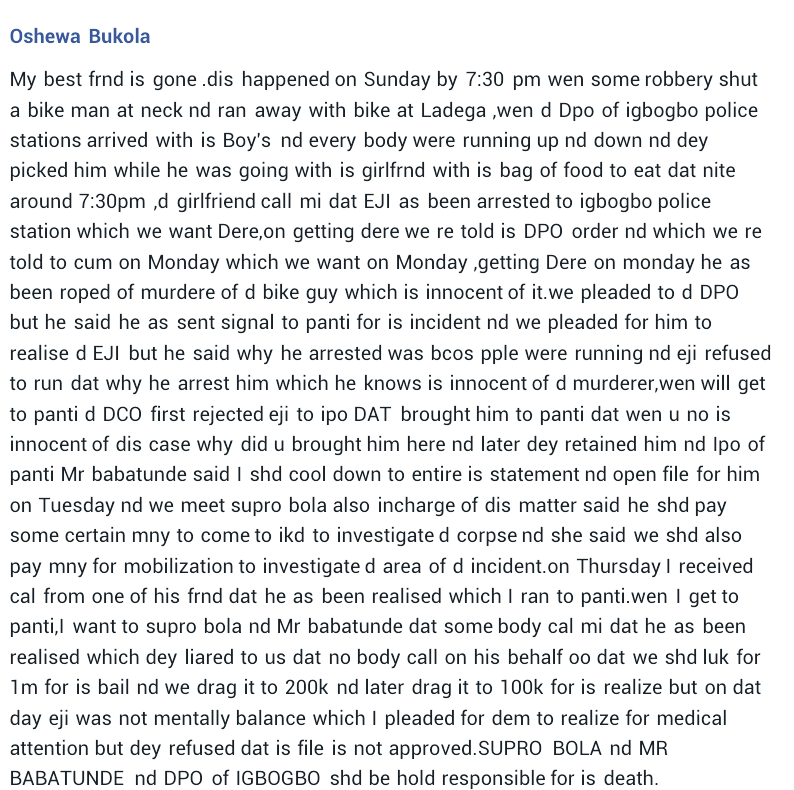 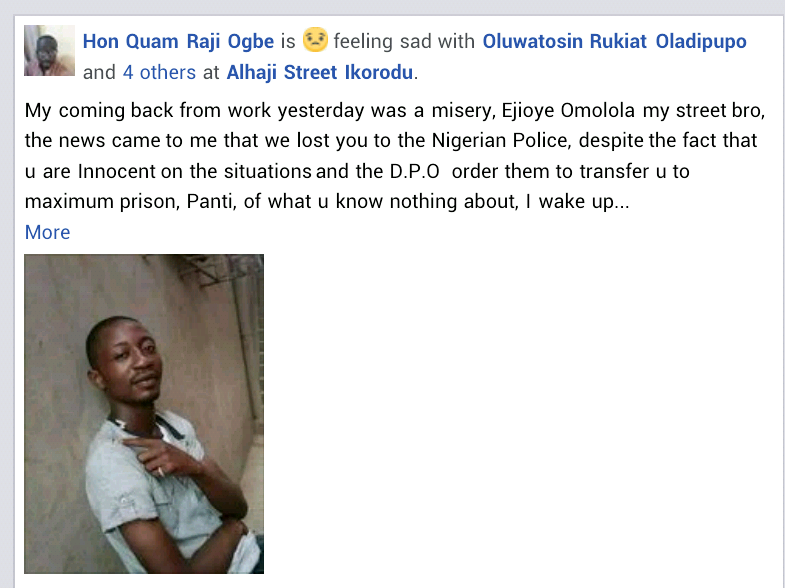 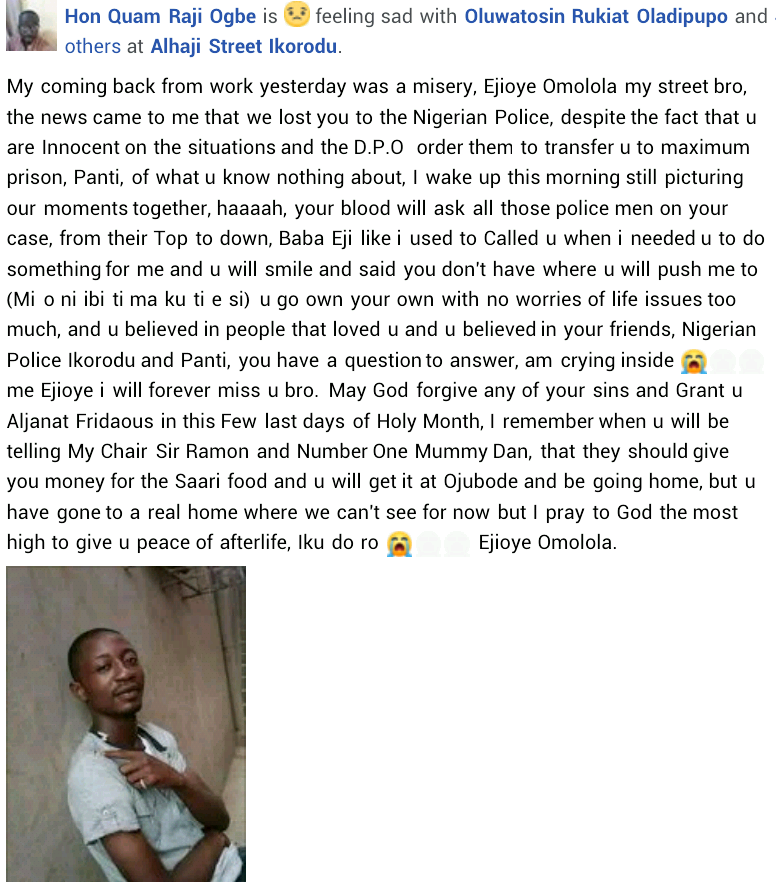 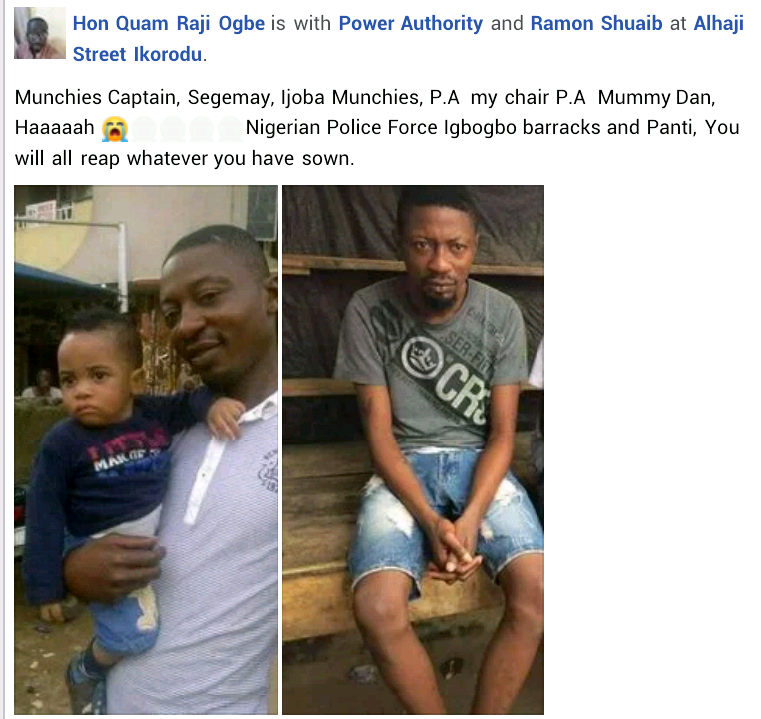