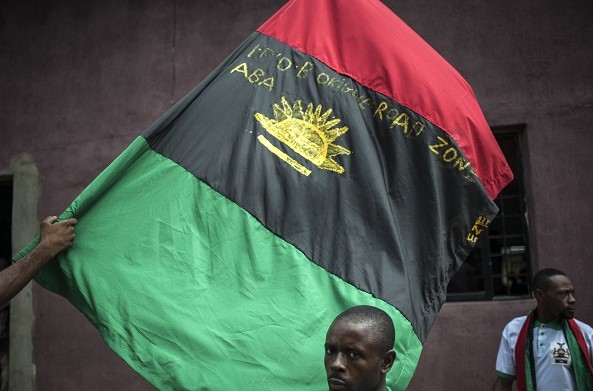 Latest Biafra news for today Friday, 12th November 2021 can be accessed below.

Newsonline has compiled latest Biafra news today, which means the latest news about Biafra activist Nnamdi Kanu and other Biafra groups such as the IPOB, MASSOB, BIM and BNL.

Below are the latest Biafra news & Nnamdi Kanu news today…

Newsonline reports that Justice Binta Nyako of the Federal High Court sitting in Abuja has adjourned trial of detained leader of the Indegenious People of Biafra, IPOB, Nnamdi Kanu till January 19, 2022…..Read More….

Newsonline reports that the Leader of the Indigenous People of Biafra, IPOB, Nnamdi Kanu confronted a security operative on Thursday for blocking his lawyers from entering the court…..Read More…

Newsonline reports that the leader of the outlawed Indigenous People of Biafra (IPOB), Nnamdi Kanu, has arrived at the Federal High Court in Abuja in continuation of his trial….Read More…

Former Presidential aide, Doyin Okupe, on Friday stated that the Indigenous Peoples of Biafra has proved that it is not a terrorist group following its decision to cancel the sit-at-home order that could have affected the governorship election in Anambra State.

Okupe in a post on his Facebook account noted that it was time for President Muhammadu Buhari-led government to negotiate with IPOB and its leader, Nnamdi Kanu.

He said, “This decision of IPOB is a very reasonable one, coming from an organisation whose major concern is justice, equity and self-determination for its people.

“By this singular act of compassionate and progressive civility, in furtherance of our Democracy, IPOB, to my mind has proved unequivocally that it is not a terrorist organisation rather it is one that can be called to a round table to reason with.”

The former presidential aide further stated that peaceful negotiation can resolve what violence may not achieve in several years.

Okupe called on Nigerians to charge the Buhari government to negotiate with the outlawed group.

“May God help and guide our leaders to lead us aright in Jesus Name,” he said.

The group had ordered the sit-at-home across the region if the federal government fail to release its detained leader, Mazi Nnamdi Kanu.

Many individuals had condemned the order as it would instil fear into the hearts of those willing to participate in the Anambra governorship election.

But in a statement on Thursday, IPOB spokesperson, Emma Powerful had said the order was cancelled following consultations with elders, traditional, and religious leaders.

IPOB has canceled sit-at-home order ahead of Anambra election.
Newsone reports that the Indigenous People of Biafra (IPOB) led by Nnamdi Kanu, has denied calling for the boycott of the Anambra State governorship election, barely 48 hours to the poll.

Kingsley Kanunta Kanu, brother to the leader of proscribed Indigenous People of Biafra (IPOB), Nnamdi Kanu, on Thursday claimed that Kenya has confirmed in Court that his sibling did not undergo extradition proceedings in the East African nation.

The candidates in Saturday’s gubernatorial election in Anambra have demanded the immediate release of the detained leader of the proscribed Indigenous People of Biafra (IPOB), Nnamdi Kanu.

Pro-Biafra activist, Nnamdi Kanu’s human rights suit which was set for Tuesday has been adjourned to 19th November by the Abia State High Court.