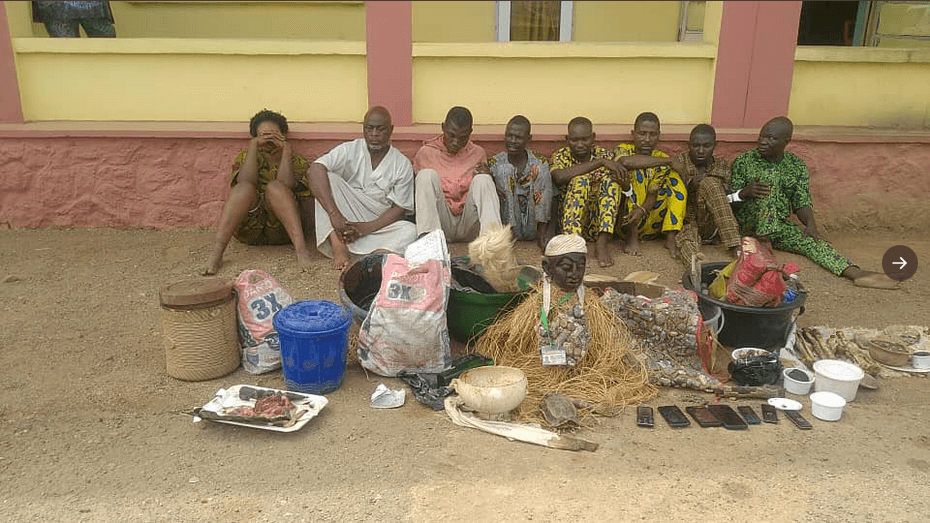 A couple and six other suspects have been arrested for allegedly killing, dismembering and selling parts of a 26 years old lady who has two children in Ogun State.

According to Ogun Police Public Relations Officer, SP Abimbola Oyeyemi, the eight suspects were on Wednesday 4th of January 2023, after a report was lodged at Obalende divisional headquarters; Ijebu-Ode by one Ojo Omolara.

In a statement, Oyeyemi said, “the suspects were apprehended following a report lodged at Obalende divisional headquarters; Ijebu-Ode by one Ojo Omolara who reported that her neighbor, Oyindamola Adeyemi left home since morning of Wednesday 28th of December 2022; didn’t return home and her phone has since then been switched off. Since it is not 24hrs, she was advised to come back.

“But the following day, been 29th of December 2022, while patrol team from Obalende division was on routine patrol, a dismembered body of a lady was discovered by the roadside and the body was taken to a mortuary.

“On getting there, the deceased friend, Ojo Omolara was able to identify it through the bra and underwear she put on since her head was already chopped off. Having recognized the body, the DPO Obanlende division, SP Murphy Salami mobilized his crack detectives and embarked on a technical intelligence-based investigation which led to one Taiwo Olutufese Ajalorun an herbalist whose possession the deceased Itel phone was recovered.

“He was promptly arrested, and a search warrant was duly executed in his house where a container full of human blood, later discovered to be that of the deceased was recovered. His arrest led to the apprehension of his friend, Lukman Oladele, whose house the legs of the deceased were also recovered.

“They both made confessional statements which led to the arrest of other suspects who are buyers of different parts of the deceased body, on interrogation, Taiwo Olutufrsr Ajalorun and Lukman Oladele confessed that the deceased was lured to the house of Taiwo who happened to be her man friend. But her soon as the victim entered, she was pinned down by both Taiwo Olutufese Ajalorun and Lukman Oladele and the subsequently strangled her to death.”

he further added, “After killing her, they cut off the head, legs, and the two hands, which they sold to their standby buyers to be used for money-making ritual. According to them, the legs of the deceased were sold at the rate of N30,000, while the heart was sold for N50,000 to Hakeem Bello. The person who bought the head is still at large. The suspects confessed further that the victim was the third persons they had killed in such gruesome manner.

According to Oyeyemi, the State Commissioner of Police, CP Lanre  Bankole has ordered the immediate transfer of the suspects to the Homicide section of the State criminal investigation department.