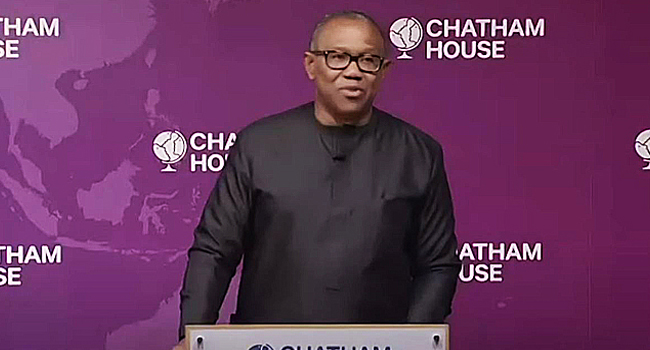 The Presidential Candidate of the Labour Party, Peter Obi, has said he would declare war on electricity if elected president of the country on 25 February 2023.

The former governor of Anambra State said this on Monday while addressing the British-based think tank, Chatham House.

The Labour Party candidate said under his administration, he would liberalize the power sector to ensure that electricity improves to drive the economy from consumption to production.

According to the most popular candidate for Nigeria’s next month’s presidential election, Obi, efficient power supply, rail, road and air transportation will be the fifth plank of his governance if elected.

“The fifth plank of our governance priorities is to Build expansive infrastructure for efficient power supply, rail, road and air transportation, and pipeline network, through integrated public-private partnerships, and entrepreneurial public sector governance’,” he said.

Further breaking down how he intends to solve the decades-long electricity problem of Africa’s most populous country, Peter Obi told the world at Chatham House:

“Our solution to the perennial power problem in Nigeria is a comprehensive one that covers transmission, distribution, generation and financing as detailed in our Manifesto.

“We will support local manufacturing capacity of power technologies and encourage and expand local R&D in universities, training centers, and workshops through which many jobs will be created,” he said.