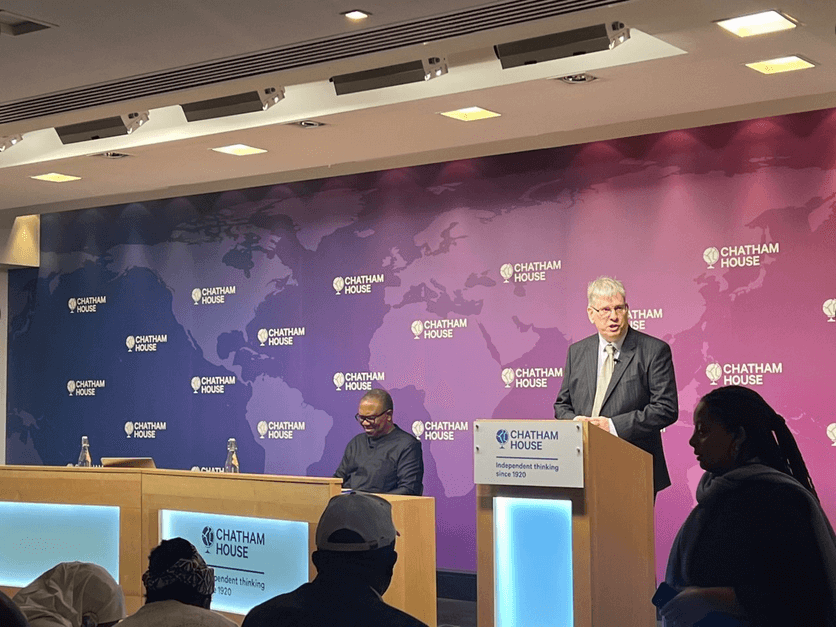 A former United Kingdom (UK) High Commissioner to Nigeria, Paul Arkwright, has described the presidential candidate of the Labour Party, Peter Obi, as the best candidate for Nigeria in the 2023 election.

NewsOnline reports that the diplomat said the presentation of clear and implementable policies by the former governor of Anambra state showed he understood the problems of Nigeria and the best solutions to address them.

Arkwright said this on Monday after listening to the presidential candidate of the Labour Party, Peter Obi, at Chatham House.

The former UK High Commissioner to Nigeria said he was not only impressed by the speeches delivered by Obi, but his prompt answering of questions, and addressing the issues confronting the country of West Africa.

Arkwright who made this known on his Twitter handle said, “Good to be @ChathamHousefor the @PeterObievent today. I was impressed – practical solutions for Naija’s many challenges, coupled with a passion for the country – and for getting the job done.”

READ ALSO: I WILL DECLARE WAR ON ELECTRICITY – PETER OBI

The LP presidential candidate, who is the most popular of the major candidates after the joined his present party in May 2022, captured the minds of Nigerian youths and the working class with his clear-cut policies to move the country from consumption to production. Obi has also been seen by Nigerian youths as the only non-corrupt Nigerian politician who can address the damages done by the political class of the country through corruption since the return of Africa’s most populous nation to democracy in 1999.

Peter Obi at Chatham House on Monday said, “We have alarming insecurity that has led to loss of many lives and properties, significant decline in food and economic output, immense trauma that has compromised the mental health of communities,and in some cases, irredentist pressures and disaffection with the Nigerian project.

“The economy is in crisis with a troubling debt profile worsened by oil theft of proportion once hard to even imagine, two economic recessions in six years and a lamentable power sector that significantly constrains manufacturing and social life.

“The Nigerian state is captive to an elite gang-up and a rentier political economy that has concentrated political power in the hands of those who came to power and influence mainly through their own contrivances and not through the affirmation of the people, the very people on whose sentiments they grabbed power often become the primary victims of such political fraud that has rendered Nigeria a failing state with a worsening leadership crisis.

He, however, promised that if elected by the Nigerian people, “Nigeria’s resources will be most prudently used and as the Commander in Chief, I Peter Obi sincerely pledge that Our Pact with Nigeria will be diligently pursued to create a new Nigeria characterized by sustainable/inclusive growth and development.”

Chatham House: I Will Declare War On Electricity – Peter Obi