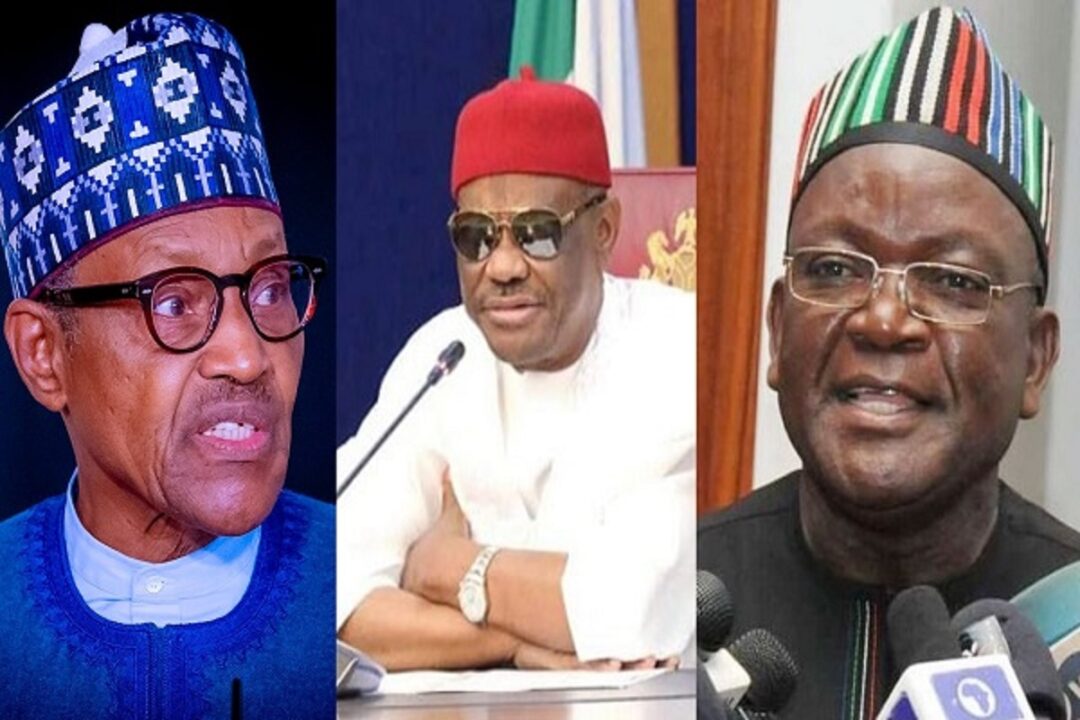 NewsOnline reports that the Group of Five Governors (G-5) under the auspices of the Integrity Governors in the Peoples Democratic Party (PDP) has challenged President Muhammadu Buhari to name Governors stealing funds belonging to Local Government Areas.

Speaking on Buhari’s revelations of how Governors were pilfering monies released to local councils in their States, Governors Nyesom Wike(Rivers) and Samuel Ortom (Benue) said they were not involved in such criminality.

They spoke on Friday during the inauguration of Mgbuoalimini internal roads in Rumueme Kingdom, Obio-Akpor Local Government Area performed by Ortom.

Wike, who first reacted to the allegation, said the G-5 Governors were known for their integrity and would not touch monies meant for local councils.

The Governor said since he was elected he had never touched monies that accrued to local government coffers and challenged any council chairman to prove him wrong.

“So, Mr. President who are those people? You know them. Tell us. It is not good to say (what we call class defamation) ‘governors’. I am not one of them. Please spare me and tell Nigerians that the Integrity Governors are not part of them. We have integrity. We are not part of them. Do us a favour to announce those states taking local government money.

“Since 2015 till now I have never, I will not have any reason to do it. When I was a chairman under Dr. Peter Odili, he never touched one naira of local government funds. Nobody touched my funds. So, why will I begin to touch other people’s funds? Remove the integrity governors. We are men of honour. We will not touch. But announce those who are touching.

“Let us not be generalising things. It is not good for this country. That is why the country is not growing. If someone has done bad say so. Don’t say people are doing bad. Who are those doing that bad. Mention their names.

“I, Nyesom Ezenwo Wike, Comm ander of Order of the Niger, Grand Service Star of Rivers State, life bencher, I have never and I will not touch any local government money. I don’t even know what they get a month. I don’t give a damn.

“I have never one day called any local government to partner with State to execute any project. Ordinarily, some of these projects we are doing ought to be local government projects. Let one council chairman raise his hands and say ‘sir our money came yesterday, you tampered with our money’. Mr. President I know you are a leader and that you will mention names. It doesn’t matter the party they belong to”.

While inaugurating the project, Ortom joined Wike to commend President Buhari but quickly asked him to name the Governors stealing local government funds.

He said when the Federal Government enacted an instrument on local government autonomy, monies were paid directly to individual councils in Benue.

He said: “I join Wike to appreciate Mr. President for his contribution to growth. But I know that many people are frustrating him. Some of his ministers and advisers are advising him wrongly. It is a logical fallacy to say that all governors are criminals, all governors are stealing from the local government.

“I join governor Wike to say that since 2015, let EFCC come in, let ICPC come and every other agency that can unearth this as far as Benue State is concerned let them come. There is no point generalising. I don’t do it. I don’t like. When the federal government enacted something and say local government should have financial autonomy from that day all monies are paid to the local government.

“All monies go to the individual councils. In my own case pensioners and those that own gratuities are members of the joint council of local government. So they appropriate the money the way they want it. Since 2015 I have operated an elected local government system. I have no authority over them.

“If not because he is the President and anything the President says we are bound to respect I would said he was wrong. But it is important to point out to him that some of us are not involved.

“I join Governor Wike to say bring out those state governors, who take part of the local government money and pocket for themselves. I think it is just fair and equitable that you do that so that everybody will know what is happening in our country”.