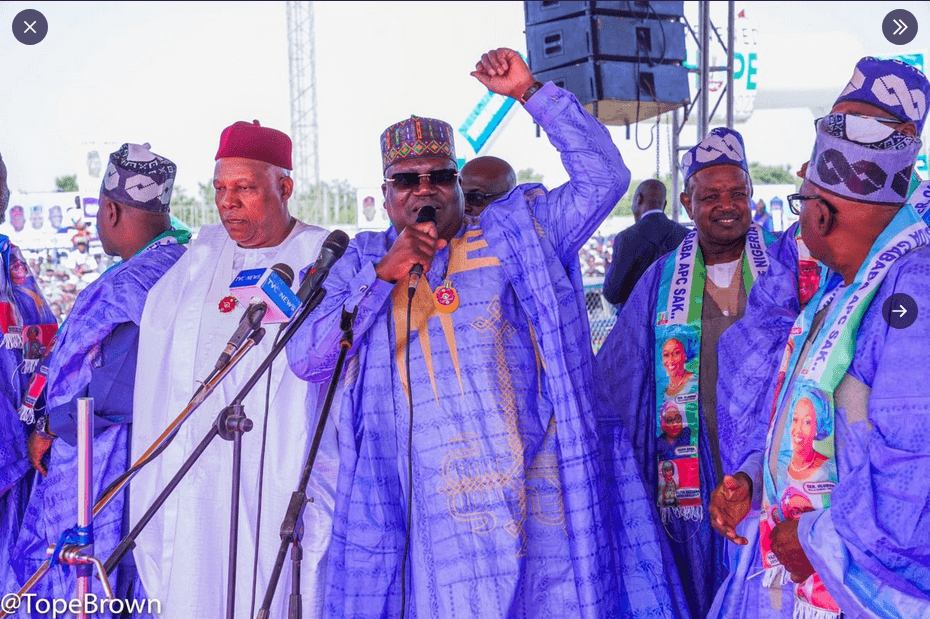 The President of the Senate, Ahmad Lawa, has said the main opposition Peoples Democratic Party (PDP), should be blamed for Boko Haram, activities of bandits and attacks by Fulani herdsmen on farmers and not President Muhammadu Buhari.

NewsOnline reports that Ahmad Lawan said under the PDP leadership of 16 years, Nigeria was a shadow of itself until Buhari and the All progressives Congress (APC) took over power in 2015.

Lawan said this on Tuesday while speaking at the Presidential Campaign Rally for Bola Tinubu and Kashim Shettima which held in Damaturu Yobe State.

The senate president said, but for Buhari, all North East states of the country would have remained in a state of emergency as a result of the activities of Boko Haram and other terrorist groups that festered under the PDP administration.

Lawan said,  “PDP mismanaged and mal-administer Nigeria for 16 years. When Boko Haram started in the northeast, in Borno state, the then leadership of PDP said it was not true. There was nothing like Boko Haram and Boko Haram blossomed. Boko Haram flourished and Boko Haram gained ground and took root.”

Praising Buhari, who was in the state to commission projects and campaign for Bola Tinubu, Lawan said, “Your Excellency, Boko Haram caused maximum, devastating impacts in our lives here. Your Excellency, Borno, Yobe and Adamawa particularly, we were under a state of emergency for 18 months.

“For 18 months, the Federal Government then, stopped our statutory allocations to our local governments. We suffered, our people suffered. No developmental projects going on at all until you came in 2015. That was the salvation moment.

Lawan added that “during that time (PDP tenure from 1999- 2014), even the ecological fund or stabilization account was based on party. They will give to only PDP states. They will not give other states that were in opposition. You came, you changed all that.

“Your Excellency, today, we have 41 million registered Nigerians as APC members. All we need to do is mobilize our base.

“Your Excellency, Yobe State is an APC base. In fact at the risk of sounding controversial, I there say that there is no state in Nigeria that is more APC than Yobe State. We are going to deliver every contestable seat to APC in Yobe State.

“Your Excellency, you have been in the seat of leadership in this country. For the seven and half years, you have done wonderfully well.”

‘They lied. And lied and lied. They want us to believe that they did something. In fact PDP should be ashamed of itself. They destroyed this country. They should have no chance to go round this country, seeking the support of Nigerians.

“You have provided security. As far as we are concerned, the new insecurity that we are seeing, we have acknowledged that it is true and that is the beginning of the solution and we are all working hard to ensure that before you leave before Asiwaju takes the oath of office on the 29th of May, 2023, the security situation would have further improved,” Lawan added.