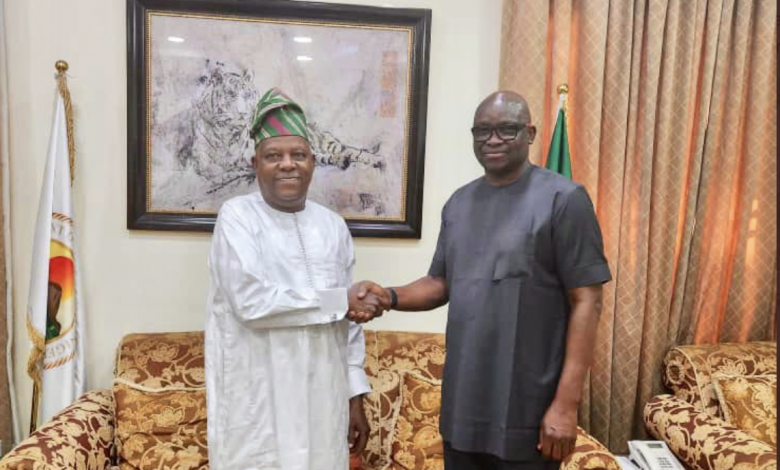 Fayose meets with Shettima in Lagos, sparks up rumours of his defection to APC.

NewsOnline reports that Former Governor of Ekiti, Ayodele Fayose, on Tuesday, met with the Vice-Presidential Candidate of the All Progressives Congress, APC, Senator Kashim Shettima.

Shettima visited the popular politician in his Lagos Residence to seek support ahead of the forthcoming February 25 presidential election in the country.

The visit to Lagos was made known by the former Borno State Governor, in a post he made on his Facebook timeline adding pictures of Fayose and himself in his house.

He wrote, “I paid my brother, the former governor of Ekiti State, Ayodele Peter Fayose a visit.

“The great Oshoko welcomed us with warmth and rare camaraderie. Thank you for your support and God bless you for hosting me and my team,” he added.

Also Fayose’s son, Joju, who is vying for a position in the House of Representatives was suspended alongside several others by the party.

Fayose, who is the camp of aggrieved governors and stakeholders of the Peoples Democratic Party led by Rivers State Governor, Nyesom Wike, had last week avoided the presidential campaign rally of the PDP presidential candidate, Atiku Abubakar, in Ekiti State.

This development has added fire to rumours that the Ekiti strongman may soon pitch his tent somewhere else.

Fayose however, has debunked the possibility of him defecting to the ruling party. He said it was normal in election season for politicians looking for support to pay him a visit.

He said; “Anybody looking for votes will visit anybody. It is within their rights to do so. Besides, it shows humility for the APC vice presidential candidate to visit the opposition.

“The visit shows the level of recognition and relevance that is accorded to me, and I have no apology about that. I am available if anyone comes to visit me.

“Don’t forget that I was governor at the same time as Tinubu. Besides, I have said that Asiwaju is a leader in the South-West.

“The current Ekiti State governor visited me. I will share pictures of their visits. I can’t run away from the opposition because of politics. Only God enthrones,” he said.

If You Wish Nigeria To Worsen, Vote APC Or PDP- Oby Ezekwesili