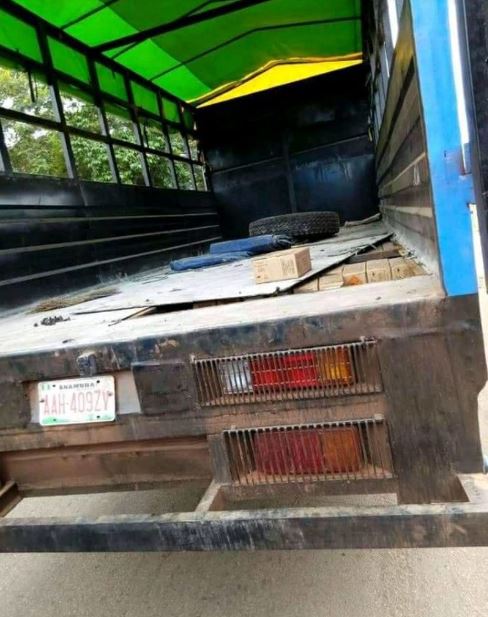 A truckload of live bullets has fallen in Onitsha, Anambra State.

News Online reports that residents of the commercial city of Onitsha Anambra State have been gripped with fear, following the fall of a truck loaded with live bullets in the area.

The Mercedes Benz 911 truck, which fell along Awka road in the city in the early hours of Sunday, had the cartons of the bullets spill into the drainage when it skidded off the road.

The contents made early morning worshippers to raise the alarm, which attracted the presence of heavy security men who cordoned off the arena.

An eyewitness, who does not want to be mentioned, told said the security situation had put everyone on the alert.

It was gathered the truck was moving the goods out of Onitsha to a yet-to-be identified location when the driver lost control and skidded off the road, making it fall into a ditch.

Another source said the truck fell around 5am when the driver and his conductor, after sustaining minor injuries, tried to evacuate and conceal the contents.

“But they could not do much before daybreak when some police operatives arrived the accident scene only to discover the truck was laden with a consignment of live bullets,” a source said.

On the cartons of bullets allegedly being conveyed by the truck, he said he had not been properly briefed on the situation.

However, he assured investigation had commenced into the matter, promising to get back to the reporter.

But a Senior Police Officer, who spoke with The Nation in confidence, confirmed the incident.

He added the driver of the vehicle had been arrested and the lorry impounded, adding the conductor escaped.

‘We are going to get to the root of the matter. The conductor is equally being trailed. It’s a very difficult times for everybody and people have to be careful,” he said