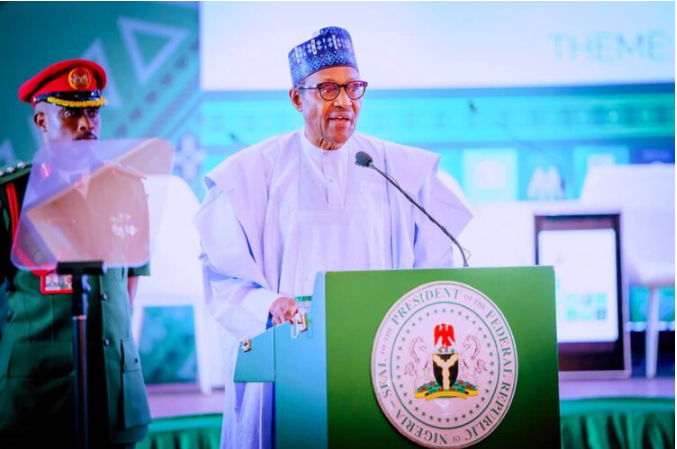 Top 12 events that shaped the Presidency in 2022 can be accessed below.

Newsonline reports that the year 2022 has been eventful and marked by political activities as politicians and political parties engage themselves in party campaigns ahead of the 2023 general elections.

All the political parties conducted primaries for elections to fill different positions amid the challenges posed by the electoral act.

In no particular order, these events and moments that dominated the news shaped the year, in terms of magnitude and outlook.

The signing of the Electoral act

All eyes were on President Muhammadu Buhari to sign the amended electoral act. The new electoral act contained some game changers like the electronic transmission of votes.

Many were surprised by the delay of the president to sign the new act taking into cognizance his vow to bequeath a legacy of free, free, and credible elections to Nigerians.

It is instructive to note that the President had refused assent to the bill five times citing reasons that ranged from cost of election, insecurity, and drafting errors to proximity to the date of elections.

On February 25, the president finally signed the reworked Electoral Amendment bill into law.

Before he signed it, the president sought an amendment to the bill by asking the National Assembly to delete Clause 84(12) of the bill.

The clause reads, “No political appointee at any level shall be a voting delegate or be voted for at the Convention or Congress of any political party for the nomination of candidates for any election.”

The president said the Clause constitutes a disenfranchisement of serving political office holders from voting or being voted for at conventions or congresses of any political party, for the nomination of candidates for any election in cases where it holds earlier than 30 days before the national election.

President Buhari has often been accused of being aloof to party matters. The pussyfooting of the Mai Mala Buni led interim committee to conduct a convention that nearly led to the implosion of the party. It led to a mini coup within the All Progressive Congress ( APC).

On March 8, Niger State governor, Abubakar resumed at the APC national headquarters claiming to be the acting chairman.

It took the personal intervention of the president to restore sanity to the party.

In a letter dated March 16 and addressed to Atiku Bagudu, Kebbi governor and chairman of the Progressives Governors Forum (PGF) said Mai Mala Buni, should be allowed to plan the national convention of the APC.

The president said there is a need for the party to avoid litigation because the party has aggrieved members who have threatened to go to court.

The convention was finally held with former Nasarawa State governor, Senator Abdullahi Adamu emerging as the consensus chairman of the party.

The presidential primary of the ruling APC was seen as a battle of giants. Many party faithful were waiting for President Buhari to show his hand and pick his preferred candidate.

Besides, it is the norm for President and governors to chose their preferred successor .

Recall that the president had previously single-handedly chosen Adamu as the chairman of the party. So most party members were expecting the same scenario to play out.

They were calls for the party to have a consensus candidate. It also took the intervention of some northern governors to insist that power should shift to the south.

There was mild controversy as the APC national chairman announced Lawan as the consensus presidential candidate.

But the national working committee (NWC) of the party distanced itself from Adamu’s position and aligned with the decision of the northern APC governors who resolved to power shift to the south.

At the end of the day, Buhari called for an open contest and all the candidates went to the contest.

On June 8, Bola Tinubu won the presidential primary election of the APC.

He polled 1,271 votes to defeat 13 other presidential hopefuls in the election.

The worsening insecurity in the country culminated in the Kuje prison break in the federal capital terrority.

Insurgents had attacked the correctional service facility in the federal capital territory (FCT) in July.

Over 900 inmates, including Boko Haram suspects who were in the prison, escaped.

The Islamic State in West Africa Province (ISWAP) had claimed responsibility for the attack.

During that period , the presidential convoy was attacked by gunmen en route to Katsina state .

Also , some presidential guards were also attacked and killed in Abuja .

The insecurity has found its way to the door step of the federal capital .

That jarred the security chiefs as the President read the riot mandate . He gave them the mandate to end the rampaging insecurity .

Some days later , the results began to manifest as the military since then have been recording tremendous success against bandits and insurgents in the country .

After dislodging Terrorists from the North East, elements of the terror group on march 28,2022 attacked an Abuja-Kaduna bound train and kidnapped hundreds of Nigerians.

On June 5,2022,the terrorists again attacked a Catholic church in Owo, Ondo state and killed many worshipers

On 14 November 2022,the Nigerian Military declared 19 Terrorists wanted and placed N5m bounty each on information leading to their arrests.

The Education Sector In 2022

Many Nigerian Students and other stakeholders welcomed the year 2022 with high hopes. Unfortunately, the national picture of the education sector in 2022 still presents a tolerable showing, clouded largely by trade Union’s strike, funding constraints, attacks on schools and others, which disrupted activities of the sector.

The increasing cases of kidnapping of school children and teachers, including tertiary institutions, has in no small measure disrupted learning and created anxiety in the sector.

The Academic Staff Union of Universities (ASUU) dropped a bombshell on February 14 2022 when it declared a warning strike, which was rolled over after the 1month ultimatum elapsed without the federal government meeting its demands. The Union eventually embarked on strike that  lasted for over 8 months.

The decision of ASUU to stave off another strike due to the refusal of the federal government to honour its agreement with the union have shattered the dreams of many Nigerian youths. However, Government’s alleged resort to blackmail against the union and its refusal to pay lecturers their withheld salaries is still creating anxiety in the education sector.

Despite the launching of Safe School Initiative in 2014 to ensure safer school environment for all Nigerian children, attacks on schools continues.

The Teachers’ Registration Council of Nigeria (TRCN) disclosed that attacks on schools by insurgents claimed the lives of more than 2,295 teachers in the North-east between 2009 and 2022.

Lack of poor funding remains one of the greatest challenges facing education in Nigeria. In the year 2022, Nigeria’s education sector was again allocated much lower than the 26 percent of national budget recommended by the United Nations. The Federal Government’s 2022 budgetary allocation to education is 5.39 percent, which is N923. 79 billion out of the total budget of N17. 13 trillion

Migration of Nigerian Teachers To Europe, Others

The high number of teachers in the country leaving the nation’s teaching profession for other country is on the rise in 2022.

Unlike medical personnel, Nigeria is currently grappling with mass migration of teachers to Europe and other countries. The United Kingdom has began employment of qualified Nigerian teachers with over 350,000 qualified for such employment.