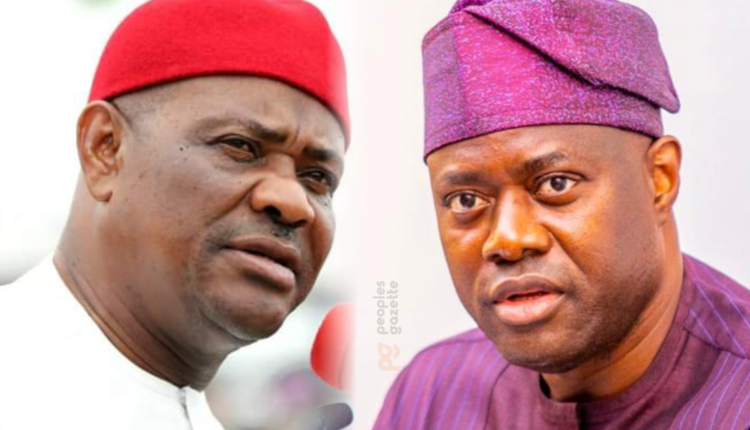 Wike tells Oyo electorates Governor Makinde will tell them his preferred presidential candidate to vote for.

Newsonline reports that the Governor of Rivers State, Nyesom Wike on Thursday, told Oyo State voters that their governor, Seyi Makinde, would inform them of the preferred presidential candidate to be voted for in the February 25 presidential poll.

Wike, also said Oyo people should vote for all other candidates of PDP including Makinde while warning other governorship candidates to withdraw in their own interests.

The leader of the aggrieved PDP governors, popularly called the G-5 made this statement during the party Campaign flag-off of Governor Makinde.

He declared Makinde as the only credible candidate in the race for the Oyo governorship seat.

He said, “Let me thank you (referring to the crowd) for making the assurance available in the person of a dependable young man you can trust, a young man you can go home with your two eyes closed, a young man when he tells you, Yes, his Yes is Yes when it tells you No, his No is No and that is why he is one of those (Integrity Group) who believes in fairness, equity, and justice.

“Let me use this opportunity and tell all of you (the electorates) if anybody is contesting (for the Oyo guber election) in other parties, today, 5th January 2023, please I’m giving you the final notice, withdraw now.

Recall that Wike, Seyi Makinde (Oyo), Ifeanyi Ugwuanyi (Enugu), Okezie Ikpeazu (Abia), and Samuel Ortom (Benue) have been at loggerheads with the party and its presidential candidate, Atiku Abubakar since his emergence as the party’s flag-bearer.

They have insisted that they will not support Atiku unless the party’s Chairman, Iyorchia Ayu, steps down for a Southern from the South-West to take over, arguing that it would amount to injustice for a Northern to be chairman of the party and another the presidential candidate.

Hope Uzodimma Reveals Why South-East Must Vote For Bola Tinubu