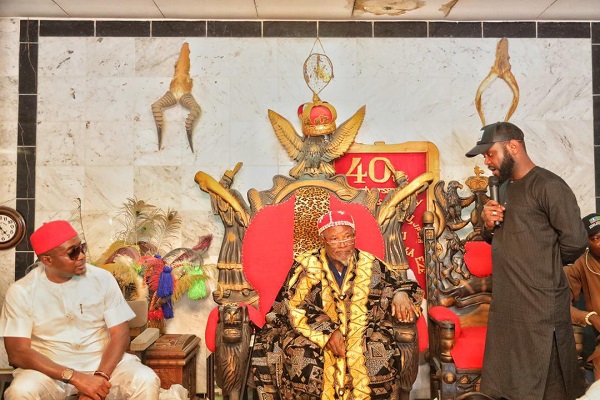 Seyi Tinubu has explained why Ndigbo should vote for his father.

NewsOnline reports that Seyi Tinubu, Son of the presidential candidate of the All Progressives Congress (APC), Asiwaju Bola Ahmed Tinubu, has appealed to the Anambra State electorate to cast their votes for his father in the forthcoming February 25 general elections.

He said Tinubu deserves the votes of the South East because he (Seyi) married an Igbo lady, which makes him a part of them.

The younger Tinubu who was in Anambra, on Tuesday, to canvass for votes for his father is said to be married to an Igbo lady.

He was conferred with the chieftancy title of (Nwannedinamba) by the traditional ruler of the Mbaukwu kingdom, Igwe Peter Anukwu, in the Awka South Local Government Area.

READ ALSO: ‘Obi Is My Tenant In Lagos, You Owe Me Votes’ – Tinubu Tells Abia Supporters

He also visited the Nigeria Union of Journalists (NUJ) Press Centre in Awka where he addressed newsmen on his father’s aspiration.

He said: “Bola Ahmed Tinubu has the experience, tolerance and capacity to change the fortunes of Nigeria for the best.

Everyone has acknowledged that his core strength is his vision for peace, progress and economic development.

“He also has a penchant for discovering, nurturing and empowering talents. Testimonies abound across Nigeria, Igbos, Yorubas, Fulanis, Efiks, Ibibios, Hausas and all the other tribes.

“So I am appealing to Ndi-Anambra and the Igbo region at large to vote for my father because I married an Igbo lady.”

He  was accompanied by former Chief of Protocol and Deputy Chief of Staff to Obiano, Uzuegbunam Okagbue; Anambra APC youth leader, Jideofor Ejimofor among others.

Anambra NUJ chairman, Dr Odogwu Emeka Odogwu, who was represented by his vice, Mrs Ngozi Obileri,  assured Tinubu of the union’s readiness in reporting issues that would sustain the already existing peace and unity and oneness of the country.

At the palace of the Mbaukwu monarch, Igwe Anugwu, Seyi Tinubu said: ” Your Majesty, We are here to also seek your support and royal blessings, likewise the blessings and support of members of your cabinet, Mbaukwu people and the entire Anambra people”.

“Bola Ahmed Tinubu has the experience, tolerance and capacity to change the fortunes of Nigeria for the better.

“Igbo people are very enterprising. A Tinubu administration will harness the entrepreneurial drive and hardwork ethos of Igbo people for the continued development of Nigeria.

“My father has shown from his days as the Governor of Lagos state that he is a detribalised Nigerian.

”He brought an Igbo man into the Lagos State executive cabinet. He Also empowered several others directly and indirectly. You have seen that Igbo people living in Lagos are thriving.

“They will thrive more under a Tinubu Presidency, and also help bring back additional resources home to develop the Southeast.”

Igwe Anugwu, prayed for good health and long life for all present, and the APC Presidential Candidate, Bola Ahmed Tinubu.