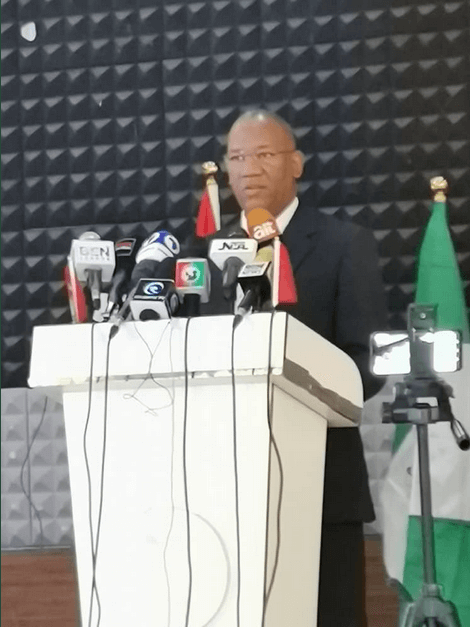 The vice-presidential candidate of the Labour  Party, Yusuf Datti Baba-Ahmad has called out Tinubu, Shettima and APC PCC for their uncivil utterances and spread of misinformation against Peter Obi.

Senator Datti made references to misinformation allegedly sponsored by the ruling APC alleging that the Labour {Party presidential candidate was against the oil exploration in Gombe and Bauchi.

Datti also pointed to a personal attack by Tinubu while campaigning in Delta State, Asaba, where he was quoted to have said mentioning Peter Obi’s name will be a disgrace to him.

READ ALSO: 2023 Election: Nigeria Will Not Be Nigeria Without Bayelsa- Tinubu

“APC’s strategy against Peter Obi now appears very clearly centered on promoting falsehood, in addition to empty and derogatory personal attacks, and of course this is because they can find no contentious points of negativity to push, Datti said.

“It is pertinent to recall how Mr. Shettima at a recent public event belittled the modest lifestyle of Peter Obi. Clearly, Mr. Shettima is out of touch with reality and cannot understand that people like Peter Obi who have reached the heights in business and material achievement have long transcended the need for ostentatious display of wealth,” he added.

Part of the statement read further: “We cannot also forget his disposition and uncooperative attitude when hundreds of schoolgirls were abducted under his watch as governor in 2014 where he did little to secure them in the first place or facilitate their r apid rescue; a Governor under who education was sustained as ‘forbidden’. The circumstances of his emergence as a Candidate in 2011 leave yet many questions unanswered.

“Others are not left out; It is important to underline that Oaths of office do not expire with tenure, and hence the comment that the Northern electorate do not need a Yoruba or Igbo leader is greatly at variance with the oaths of office taken in 1999 and 2003 respectively, and the Peace Accord of 2022. This is to call upon the owner of the statement to respectfully retract same in order to be readmitted to the honour list of esteemed presidential candidates. Truth of the matter is that every Nigerian from anywhere needs a credible and competent President. Simple.

“Going beyond the comments of candidates, it is important to further highlight, some other developments of concern to us in the Labour Party. We are concerned about the fate of areas designated by security agencies as ungoverned spaces which contain legally delineated polling units. It is necessary for INEC to clearly address the nation on how it intends to handle the challenge of conducting elections in these areas.”

The Labour Party vice-presidential candidate also condemned the attack on the party’s supporters and leader, including the killing of the party’s women leader in Kaduna.

He called on the federal government and the Independent National Electoral Commission (INEC) to take action against the attackers.

“Over the past few months we have witnessed various attacks on Labour Party Offices, meetings and our members in parts of the country, and even INEC offices have not been spared. Just a couple of days ago, Mrs. Victoria Chintex, our vibrant and able Women Leader in Kaura LG of Kaduna State was assassinated while members of her family escaped with injuries. Senseless killings have gone on for too long. We call on government within time left to at least make attempts at fulfilling its 2015 promise of securing lives and property, while serving justice to the killers. Kindly therefore join me in observing a moment of silence in remembrance of her and indeed all victims all over the country,” Datti said.

2023 Election: Nigeria Will Not Be Nigeria Without Bayelsa- Tinubu