Omah Lay and Tems have been released From Uganda Police custody.

NewsOnline Nigeria reports that Nigerian musicians, Stanley Omah Didia a.k.a Omah Lay, and Temilade Openiyi a.k.a Tems have been released after three days in custody in Uganda over violation of the country’s COVID-19 laws.

Ugandan journalist, Canary Mugume took to his Twitter handle to announce the release.

He tweeted: “Breaking: Nigerian artists @Omah_Lay and @temsbaby have been released 5 minutes ago and might fly out tonight, @Lukowoyesigyire has confirmed. #NBSUpdates @nbstv”

This online news medium recalls that the duo were arrested on Monday, charged to Magistrates’ Court and remanded in custody for allegedly committing an act capable of spreading COVID-19. 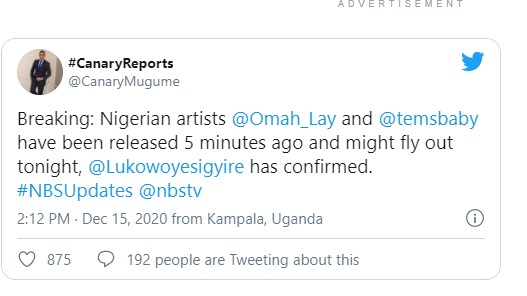