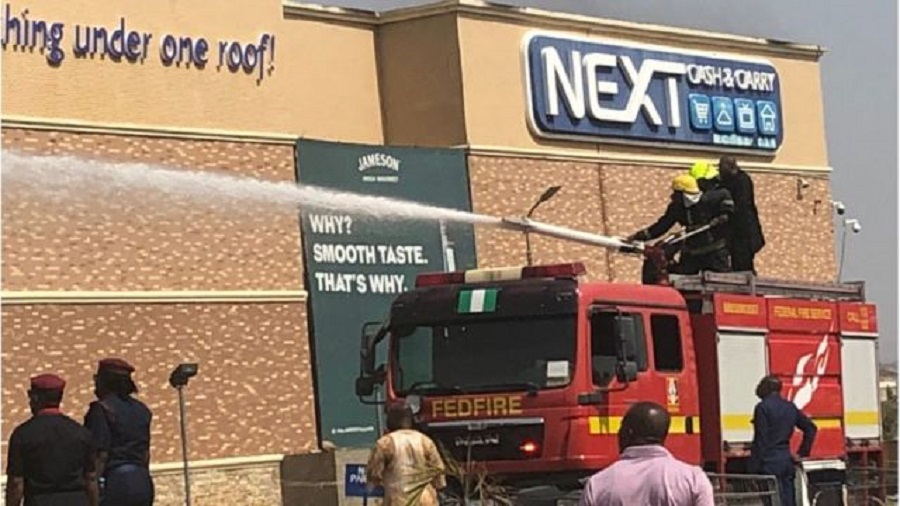 FEMA has said that no looting happened at the Next Supermarket Fire incident.

NewsOnline reports that despite trending videos on social media depicting scenes of looting at the scene of the fire that consumed part of Next Cash and Carry Supermarket,  the FCT Emergency Management Agency (FEMA), has stated that no looting happened at the supermarket.

This was disclosed in a statement on Sunday by Alhaji Abbas Idriss, Director-General of FCT Emergency Management Agency (FEMA).

According to the News Agency of Nigeria, Idriss stated that what was seen were videos of staff trying to salvage goods.

Idriss said, “Immediately the agency got to the scene of the incident, security operatives cordoned the area and fire fighting began.

“There was no looting whatsoever as being speculated by some people on the social media.

“What we saw on social media was staff of Next Cash and Carry trying to salvage goods using trolleys. Nothing was taken out of the premises by looters.”

He added that FEMA and other agencies including the Department of State Services, the Nigerian Security and Civil Defence Corps, the National Emergency Management Agency, the armed forces, Julius Berger, the NNPC received the distress call on the fire incident and worked with the Fire Service Department.

Idriss reaffirmed that no life was lost to the incident and neither was anyone injured, as he reiterated that the rescue effort was well coordinated, leading to the containment of the fire.

He however urged business owners to factor in risk elements in their business plans, citing issues experienced with the fire engines.

Recall NewsOnline Nigeria reported that Next Cash and Carry Supermarket caught fire on Sunday. The FCT Minister, Malam Muhammad Bello expressed sadness over the fire incident adding that Federal Fire Service, and the Fire Service Departments of the Nigerian Navy, Air Force, Guards Brigade and Julius Berger Nig. Plc also responded with their fire engines and promised a thorough investigation would be conducted to ascertain the cause of the fire.