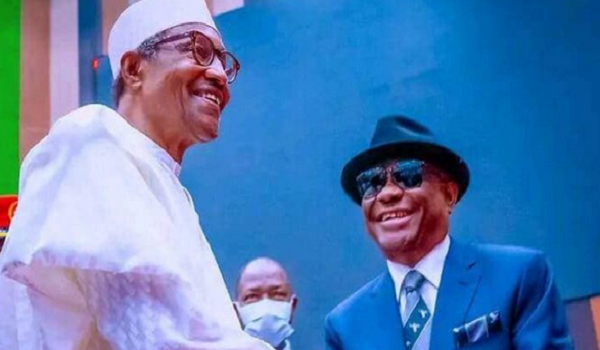 NewsOnline reports that Rivers State Governor Nyesom Ezenwo Wike has commended President Muhammadu Buhari, for his sustained efforts at defeating the Boko Haram insurgents and bandits terrorising and destroying parts of the country.

The governor noted that after the civil war broke out a few years after independence, the armed forces were forced to quell the ensuing rebellion, which ended after three gruesome years of internecine warfare.

He stated that ever since then, there is hardly a year when members of the armed forces have not been assigned to one bloody combat mission or the other either within or outside the country.

The governor said, “I commend our President, General Muhammadu Buhari, GCFR, for his sustained efforts at defeating the Boko Haram insurgents and bandits terrorizing and destroying our communities in parts of our country. The restoration of peace to our troubled geo-political regions and the conduct of free and fair general elections are the best legacies you can live for our country.

“As leaders, our goal must be one Nigeria, one destiny, and the challenges of building a more fair, inclusive and just society are not beyond us. Therefore, I will not relent in my prayers to God to enable Mr President and other leaders of our country to succeed in our mission and commitments to our country.”

He asserted that a grateful country honours her armed forces’ extraordinary bravery and courage during their service and the sacrifice of their families for the common good.

According to Wike, many members of the armed forces have paid the maximum price or been maimed while fighting in these numerous battles to achieve tactical victories over the enemies of the country and world peace.

The governor said, “We respect them for the dangerous professional path they willingly chose and love them as our children, relations, friends and members of our communities in the nation’s service.

“But they loved us more and even more significantly as fellow Nigerians by risking their lives, health, family and future on the battlefields to defend and protect us from harm’s way in return for almost nothing.

“Although the much we can do on this day is to extoll their virtues, commemorate their sacrifice and honour their heroic exploits so that they would never be forgotten for putting their lives on the line for us and others to live.”

He maintained that the country must move beyond today’s courtesies, speeches and parades to consider the families, including the innocent women and children directly devastated and thrown into untold hardship by the death or incapacitation of their breadwinners at the battlefield.

This, Wike said calls for prioritising the welfare and well-being of the armed forces in and out of service and their families with a concrete social security package, including prompt payment of terminal benefits and some form of economic security for the widows and their under-aged children.

The governor recommended that those suffering from various health challenges, including post-traumatic stress disorders, should have the best healthcare and attention from the public purse.

He said: “As a state government, we have, over the years, provided financial support to our veterans through the State Office of the Nigerian Legion. We have since redeemed the N50, 000,000.00 pledge we made during the remembrance emblem appeal fund launch in December 2022.

Wike said: “Today, I wish to donate the sum of N100, 000,000.00 (one hundred million naira) on behalf of the State government for the economic empowerment of the veteran servicemen from Rivers State.”

The governor appealed to well-meaning public and private individuals and organizations to contribute to improving the social and economic well-being of the legionnaires and the wives and children of the fallen ex-servicemen.

Rivers State chairman of Nigerian Legion, ACG Justice O. Chichi, commended Wike for the extraordinary kindness, which the Rivers State government has always shown towards the welfare and support of veterans and the families of fallen heroes.

He said: “My colleagues, widows and dependents of our fallen heroes, particularly the beneficiaries of your scholarship, have asked me to raise my voice and tell you a very big thank you, for the leader in you. We will forever be grateful to Your Excellency.”