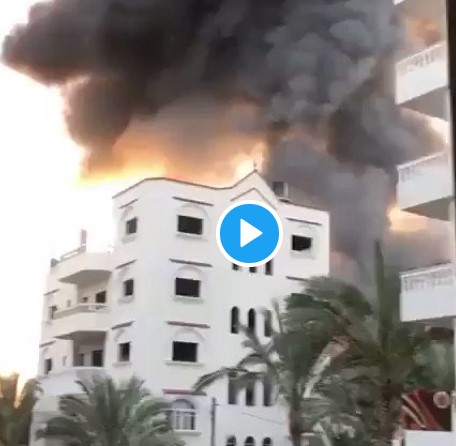 News Online reports that Israel has declared a state of emergency in the central city of Lod after rioting by Israeli Arabs, as conflict between Israeli forces and Palestinian militants intensified.

Cars were set alight and 12 people were reported injured in clashes Lod’s mayor likened to a civil war.

Israel carried out heavy airstrikes on Gaza, Palestinian, on the other hand, militants fired hundreds of rockets deep into Israel.

At least 31 people have died in some of the worst violence in years.

Palestinian militants said on Tuesday, May 11, they fired 130 missiles at the Israeli city of Tel Aviv after an Israeli air strike demolished a tower block in the Gaza Strip.

Watch Some Videoes From the Scene:

The IOF has been randomly bombing civilian infrastructure including residential buildings in Gaza. They are NOT targeting military sites specifically as they have reported💔💔💔💔💔 pic.twitter.com/xPZVQpIY5I

During the crazy Israeli aggression against the Gaza Strip a little while ago.
More than 100 missiles were fired
without warning and randomly. #GazaUnderAttack pic.twitter.com/k4WzGHLhq8

More than a 100 strike targeting all of the Gaza strip in a vicious, unprecedented attack.#GazaUnderAttack#IsraeliTerrorism pic.twitter.com/G5VvAaA7et