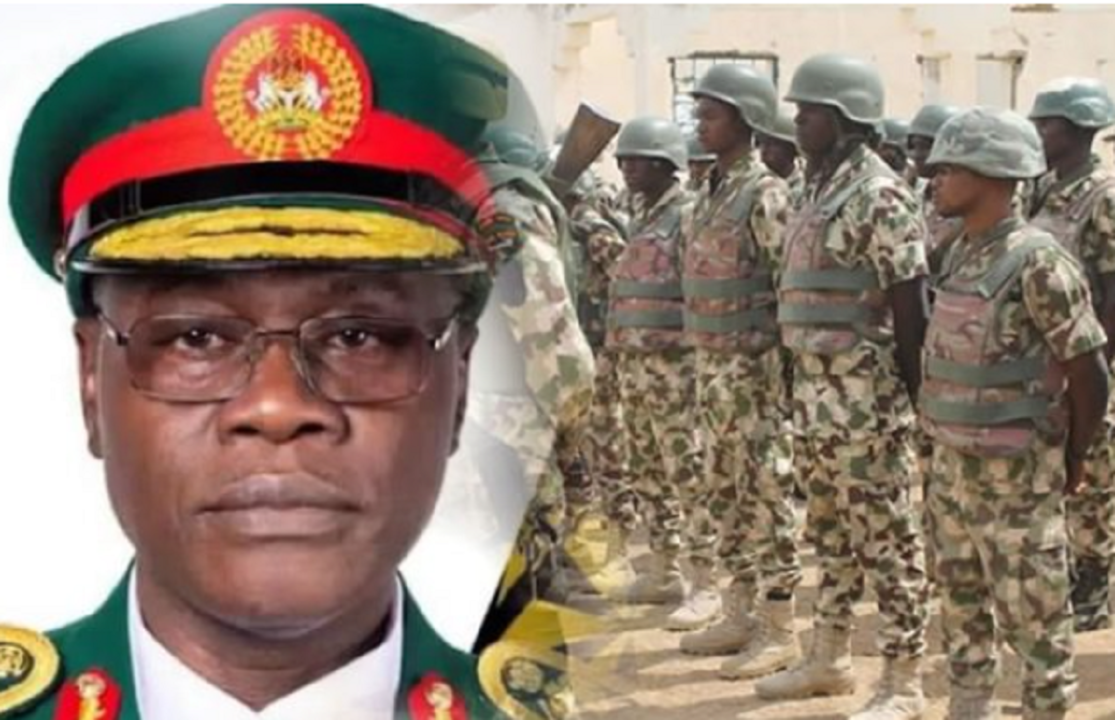 There are concerns that the plan by the military to release another set of repentant terrorists into society could subvert the progress made so far in the war against insurgency.

NewsOnline understands that no fewer than 613 rehabilitated terrorists undergoing de-radicalisation are scheduled to be handed over by the military authorities to their respective state governors.

This has, however, heightened fears that the repentant terrorists may have ulterior motives.

In July 2022, some repentant Boko Haram members, despite renouncing their membership of the terror group, were accused of having contact with their former colleagues.

The ex-terrorists were among the 800 persons who were recently reintegrated into the Bama community in Borno State and were resettled at the Government Girls Secondary School Bama.

The repentant terrorists, who were alleged to have sneaked out of Bama town, were said to have dealt in scrap metals with some Boko Haram terrorists in a market known as Daula located on the outskirts of Goniri village before the incident occurred.

Apart from this, the Kaduna State Governor, Nasir El-Rufai, and the Theatre Commander, Operation Hadin Kai, Major General Christopher Musa, had separately expressed doubt over the sincerity of the repentant terrorists in the past.

Speaking in an interview with one of our correspondents on Friday, a security expert, Timothy Avele, said the ex-terrorists could not be trusted.

He said, “On a personal level, I am not in support of the policy. You cannot release so-called repentant terrorists back into society when the war is still raging on. Who monitors them? How is the government or military sure of their loyalty to the country instead of their terrorist brothers still in the battlefield?

“As it stands now, neither the government nor the military, nor even the intelligence agencies can truly monitor these so-called repentant terrorists. We don’t have the technology to do so currently in Nigeria. We can only pray and hope that they will be good citizens, but there are no guarantees. “

But Brigadier General Bashir Adewinbi (retd.), on his part, dismissed the insinuations that those the military was planning to release to society would return to their old ways.

He added that the military would have learnt from past experience to ensure that such mistakes were not repeated, noting that the ex-terrorists would be closely monitored.

“The military must have learnt from the incident and ensured that they (repentant terrorists) might have been properly de-radicalised before releasing them into society. I think they will be watched closely and whoever is caught going back should be dealt with within the ambit of the law.  I doubt that these ones will go back to their vomit,” Adewinbi stated.

He also said the de-radicalisation and reintegration of the repentant terrorists must not be left in the hands of the military and the Borno State Government alone.

Usman said, “There is a need to follow up on the collaborative effort of the whole society approach. Beyond this, there is also a need for the Federal Government to come to the aid of the military and the Borno State Government in finding a procedure for handling the over 80,000 repentant terrorists.

“Some time ago, I heard the theatre commander talking about the Maiduguri initiative, that is fine but we are faced with a unique situation. There is nowhere in the world where you have such a huge number of terrorists surrender hence there is a need to come up with a unique approach to handle them. First, we need to work on our justice system. I have said on several occasions that people should not be allowed to get away with their crimes. We must ensure that justice is done not only to the victims, but to the suspects themselves.

“With due respect to Operation Safe Corridor, the Federal Government must intervene and set up a committee and critically evaluate them on the basis of their participation in the insurgency. Some of them were conscripted, while some of them were terrorist commanders. Some of them even participated in attacking their own towns, how can you think of and rehabilitate those people? The judiciary must be fully involved.

“We also have to dig deep into this issue to understand why they did what they did or are doing. That is where the criminal justice system administration has to come to play. It is a delicate and complex issue that has to be handled properly. We have assisted to reintegrate people elsewhere like Liberia, and Sierra Leone.  We have come out with a blend of experience and best practices to effectively resolve the issue.”

Meanwhile, some security experts and researchers have asked the Chief of Defence Staff, General Lucky Irabor, to tread with caution in his plan to hand over 613 low-risk repentant terrorists to their state governments.

Irabor disclosed the plan on Thursday during the fifth stakeholders’ meeting of the Operation Safe Corridor in Abuja.

Reacting to this move, a researcher in the Department of Political Science, University of Nigeria, Nsukka, who has worked extensively on the matter, Dr Ugwueze Ikechukwu, said the Nigerian Army and its component units should tread with caution, noting that the move might backfire if not well handled.

While stating that it was not a new move, Ikechukwu faulted the Army for not using a community-based approach in the rehabilitation and reintegration process.

The expert, who had a paper published on the matter, said, “It is also known as Operation Safe Corridor, and for a very long time, we have continued to complain about the government’s use of the kinetic approach in resolving the Boko Haram issue.

“The plan to rehabilitate and reintegrate these ‘repentant’ Boko Haram into society is only a soft approach to counter-terrorism, and we are shocked that it is still being used by the Nigerian military.

“Unfortunately, the greatest threat to this is the community approach to the issue. The programme completely lacks community inclusion. The community where these Boko Haram terrorists are reintegrated do not receive them with open arms and this is a problem.

“At a time in Borno State, when the government was pushing for this reintegration, some community members protested down to the Government House and told the government to take them to Aso Rock and not their community. Their concerns should not be pushed aside.”

He also stated that there had been issues around the so-called repentant Boko Haram members returning to the forest.

“A former House of Representatives member, Ali Ndume, complained that some of the first recipients of the rehabilitation went back to terrorism. This is why we are saying the Chief of Defence Staff, Lucky Irabor, and his men should tread with caution so that we don’t have a bigger problem of these repentant Boko Haram members acting as spies for their colleagues in the forests,” Ikechukwu added.

Also reacting, the Executive Director of the Civil Society Legislative Advocacy Centre and the Chairman of the Transition Monitoring Group, Auwal Rafsanjani, asked the Army to first rehabilitate the victims of the killings first before talking about reintegrating the repentant Boko Haram members into society.

He said, “What the Nigerian Army needs to do is to rehabilitate the communities that have been bastardised and destroyed by the terrorists rather than offering those who committed the offence a soft landing.

“The priority should be the victims, not the terrorists. They are the ones who need counselling, reconciliation, sympathy and support, which, unfortunately, the Nigerian government has refused to focus on.

“The government is pampering these terrorists, who have committed atrocities against innocent people – women, men and children.

“If there are genuine people who are repentant, we need to test them first so that we are sure that they are not going back or becoming spies to these groups of terrorists. We must be very careful. Some of these hardcore terrorists never really change.”

A retired Assistant Superintendent of Police, Olufemi Ajisafe, stated that the move was an agenda that must be stopped, noting that terrorists do not just repent.

Ajisafe said, “Terrorists are not thieves or armed robbers. They are hard-core killers and they do not repent. So, I am surprised that the Army is falling for this agenda. That blood is still in them; it is a movement for them. It is not just criminality for these people.

“These people committed offences that they should either be killed or kept away from social life for as long as they live. We are talking about Boko Haram here, for God’s sake. How do you de-radicalise Boko Haram? Is it not similar to giving them more power to strike? They should be arrested and prosecuted.”

Also commenting, a former Director of the Department of State Services, Mike Ejiofor, said he had his reservation on the matter of reintegration and urged the government to do thorough checks on the repentant terrorists.

He stated, “We already have a precedent that some people were released before and they still went back and killed a relative of a sitting senator.

“I am not in the government but I feel they must have taken all necessary measures to screen those people. But, we know it is not 100 per cent true. Some of them can go back to the forest, while some may repent. I don’t know what process they want to take to get reassurance that these terrorists will not go back to the forests, but I have my reservation.”

Another security consultant, Mr Yemi Adeyemi, urged the defence chief to not compound the already complicated security situation in the country.

“What was the success rate of the first rehabilitation that was reported? There were reports that some of them went back to the jungle. What makes this one different? I hope we don’t end up breeding spies with our own resources,” he said.

However, the President and Chief Executive Officer of Security Watch Africa Initiative, Mr Patrick Agbambu, said there was no fact that repentant terrorists returned to the forest to continue terrorism.

Agbambu said, “There are no facts that the repentant terrorists found their way back to the forests. There was no confirmation; there is no record that shows that any of the demilitarised and de-radicalised suspects returned to terrorism. It is just an assumption and speculation.

“It is not a Nigerian military programme; it is a United Nations programme. These are not the suspects; these are those who surrendered during the processes or those who were conscripted by Boko Haram by force to be used as slave workers in their farms or to perpetrate crimes.

“These repentant Boko Haram members go through a rigorous process, and at the end of the training, they are given some stipends to go and start a new life.”

The President, Nigerian Association of Criminologists, William Ekponson, said the release of the de-radicalised Boko Haram members had economic, social, and security implications for the residents of the states they would be returning to.

While faulting the rationale behind the release, Ekponson noted that Nigerians were still suffering from the shocks of the activities of the insurgents. He also expressed concern that the proposed release of the terrorists was coming at a time when they could be used as thugs by the political class.

However, a security expert, Olumide Fajana urged the state government to involve the communities in the reintegration process and properly monitor the repentant insurgents.

In a similar vein, a Professor of Psychology, Olanrenwaju Adebayo, said the government must make sure that the factors that led the young men into insurgency, such as unemployment, poverty and lack of relationships, must be replaced by meaningful activities that would make them to have a sense of belonging in society.