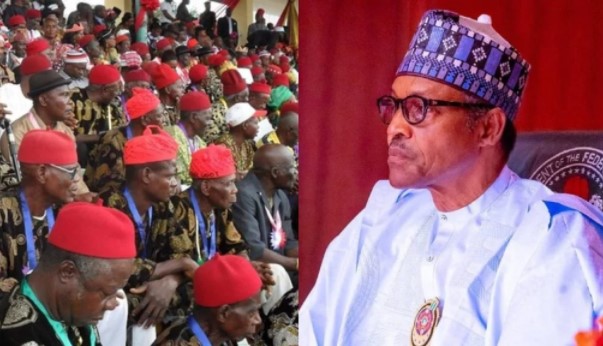 President Buhari has been given an ultimatum to withdraw his comment and apologize to Ndigbo over the civil war threat.

News Online reports that the apex Igbo socio-cultural organization, Ohanaeze Ndigbo has asked President Muhammadu Buhari to retract his threat against secessionist agitators in the Southeast.

Buhari had in a tweet yesterday vowed to come down on those against his Government just like the civil war.

Ohanaeze leadership has now asked Buhari to withdraw the tweet and apologize to the people of Southeast.

In a statement by Ohanaeze Secretary-General, Mazi Okechukwu Isiguzoro he said Buhari should “quickly rescind the threats of repeating the episode of the civil war experience which killed 3 million Igbo people and wreaked havoc on Igbo properties.

“Mr. President should also tender an unreserved apology to Ndigbo for the civil war carnage against Southeast.”

He said the insecurity in the Southeast may not be far from bandits from the North, stressing that “before now, there was clear warning, even by US Embassy that killer herdsmen and Northern bandits were heading south to destabilize the region. What is happening now is now far from it, so the tag should not be on Igbo youths.”

The Ohanaeze scribe added that they were solidly behind the Southeast Governors in the moment of tribulation and difficulty towards the restoration of peace and stability in the region.

“President Buhari should regularly be scheduled to meet with Igbo Governors and leaders, including youths and agitators. This exhibition of love is what Nigerians expect from Buhari, not civil war threat.

“The Federal Government honoured the Yoruba nation through MKO Abiola by the declaration of June 12 as Democracy Day to heal the psyche and wounds of the past. Southeast should also be honoured through presidential pardon and amnesty for all Biafra agitators.

“Never again should Ndigbo be threatened with the genocide of 30 months of Biafra war,” he stated.

Meanwhile, the Federal Government has accused Tweeter of playing double standard, insisting that President Buhari had the right to express himself.