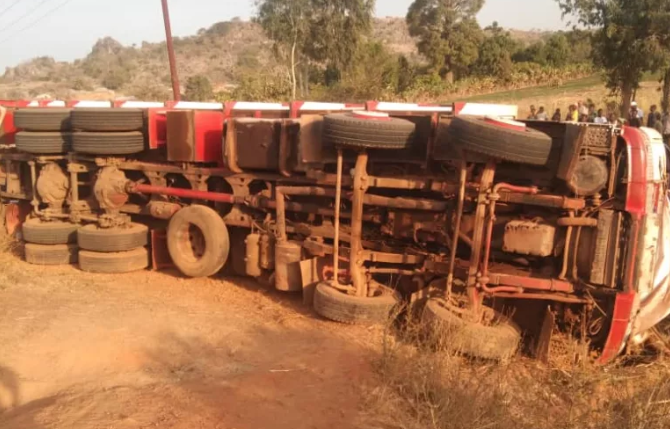 NewsOnline reports that the Plateau State Sector Command of the Federal Road Safety Corps (FRSC) has confirmed the death of 16 persons with 83 others sustaining various degrees of injuries in an accident involving a truck conveying supporters of the Peoples Democratic Party (PDP) that crashed in Panyam, Mangu local government area of the State on Saturday evening.

A statement signed by the Route Commander, Public Enlightenment Officer, FRSC, RC Peter Longsan, a copy of which was made available to journalists in Jos, the State capital on Sunday, reads: “A fatal road traffic crash occurred on 14 January 2023 along Pankshin – Jos Road Plateau St ate at about 5:00 pm.

“It was a lone crash involving a truck conveying PDP supporters from campaign rally in Plateau Central Zone of the state.

“The number of people involved was 99, 16 people adult male lost their lives while 83 people sustained various degree of injuries.”

According to the statement, those injured were taken to hospitals in Panyam and Mangu towns by FRSC operatives of Pankshin Unit Command.

It added that the corpses of the deceased have been deposited in a morgue.

FRSC said the unfortunate crash happened as a result of excessive speed and overloading, which led to loss of control and resulted to the crash.

The Corps advised people to use vehicles strictly for the purpose the manufacturer made them while motorists should maintain safe speed in order to avoid the risk of involving in road traffic crashes.

Nigeria Is At Critical Juncture, But I Will Fix It – Peter Obi