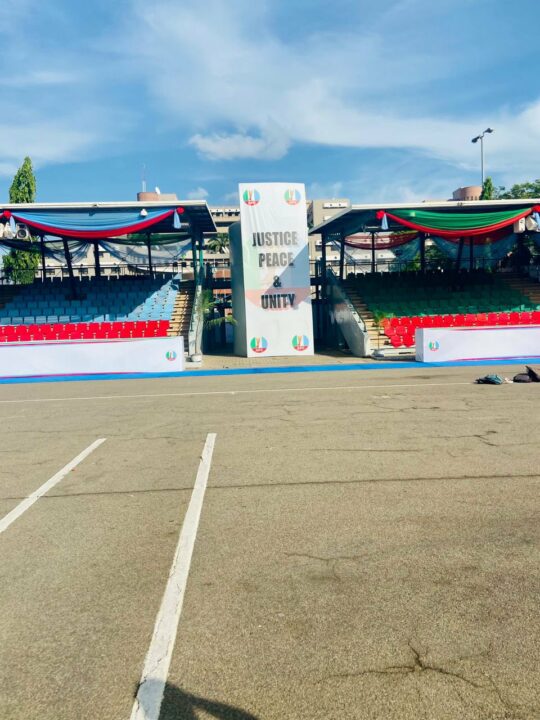 APC Presidential Primaries Results June 2022 and Live Updates from Eagles Square, Abuja can be accessed below.

Newsonline reports that all is set for the APC national convention and presidential primaries and NewsOnline Nigeria Team is live on Eagles Square, Abuja to bring you all the live updates and latest happenings as the ruling party elects flagbearer tonight.

Tinubu leads by wide margin in APC Presidential Primary 10:30 am

Former Lagos Governor, Asiwaju Bola Ahmed Tinubu, is leading by a wide margin from results so far sorted in the ongoing All Progressives Congress (APC) Presidential Primary at the Eagles Square, Abuja.

From the results so far from 17 out of 40 polling boxes, Tinubu has polled 1069 votes out of a total of 2, 203 accredited votes in the exercise.

None of the other contenders has close to 290 votes.

The Winner of APC Presidential Primaries 2022 will be the flag bearer of the All Progressive Congress in the coming 2023 general elections.

APC Convention has started, and Newsonline will provide live updates here. When the delegates’ voting process commences, we will also keep you notified. Once voting is completed, APC Party officials will count the votes and declare the winner of the presidential primaries.

The All Progressive Congress (APC) will announce the results of the presidential primary elections that is taking place in FCT Abuja. You can be following the live coverage on this page as the vote counting process begins. Once that is completed, the APC Presidential primary winner will be announced officially.

Any of the presidential aspirants delegates voted primary elections will be handed their presidential tickets to contest for the 2023 presidential elections under the party APC. Now we will provide the name of the candidates that contested and the winner of the APC presidential primaries election.

Two aspirants are in the front seat for the APC Presidential primaries ticket and results will be announced live. Vice President, Yemi Osinbajo and Former Governor of Lagos State Asiwaju Bola Tinubu are the two sure-fire contenders as it stands.

The results by states will be collated and counted live in the Eagles Square Abuja. The All Progressive Congress (APC) screened 23 aspirants and the list of APC aspirants 2023 includes:

Now it will be interesting to see who wins the APC Primaries ticket and will be eligible to contest for the 2023 Presidential Elections.

Meanwhile, Plateau Governor Simon Lilongwe, who confirmed the proposal to reporters in Abuja, said it was done based on the reality on ground and without bias and sentiments.

The five, who are from the South, are: Asiwaju Bola Ahmed Tinubu, Chibuike Amaechi, Prof Yemi Osinbajo , Dave Umahi and Kayode Fayemi.

That they are from the South attested the commitment of the Governors to zoning to the region.

Lalong said their names were listed in alphabetical order.

The Governor explained that President Muhammadu Buhari had asked the Progressives Governors’ Forum to reduce the number of aspirants and submit their names to the party.

He also said the five aspirants were also advised to discuss among themselves and agree on one candidate.

Remarkably, three of them are from Southwest, one from South south and one from the Southeast.

However, the proposal is not a decision but a suggestion.

Also, it is expected that other aspirants should embrace it to prevent any controversy arising over exclusion, which may lead to post-primary litigation.

Lalong said the long list of aspirants conveyed a crowded race that may unleash tension.

He dismissed insinuations about any consensus aspirant from the North, insisting that the Governors were committed to zoning.

Breakdown Of Delegates For APC Presidential Primary By States

The Winner of APC Presidential Primaries is Bola Tinubu. Follow this site for live updates as the presidential primaries election of the All Progressive Congress has official commenced. Our media team is around the premises and will give us updates on the situation of things over there. Once the winner is announced, we will provide an update on this page.

Let’s hear from you regarding the APC Presidential Primaries Results 2022, who do you think will emerge as the flag bearer of the renowned political party, tell us your opinion below this article, we are listening.