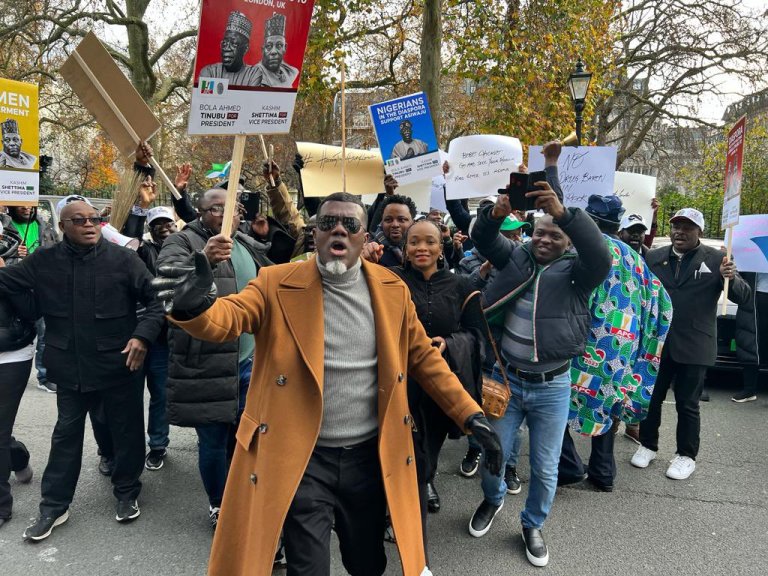 The leading opposition party,Peoples Democratic Party, PDP, on Monday staged a protest against Bola Ahmed Tinubu, the presidential candidate of the All Progressives Congress (APC) for the 2023 election.

ALSO: Chatham House: I Was Born In 1952, My Record Is Cons istent- Tinubu

Newsonline reports that tens of supporters of the PDP led by a former aide to ex-Nigerian president Goodluck Jonathan, Reno Omokri, held a demonstration at the Chatham House, United Kingdom (UK), where Tinubu spoke.

The Chatham House is used around the world to encourage inclusive and open dialogue in meetings.

The demonstrators, mainly Nigerians, accused Tinubu, a former governor of Lagos State, of drug trafficking in the 1990s.

Meanwhile, supporters of the APC and Tinubu staged a counter-protest at the Chatham House, following their rivals about.

The #HarassTinubuOutofLondon Protest Against Drug Lord Tinubu at Chatham House was a resounding success! The British media were there and Tinubu was projected to them for what he is, a KNOWN DRUG LORD! That is what will be remembered of his @ChathamHouse event!#TableShaker pic.twitter.com/K5kz48QzhQ

2023 Election: How I Will Implement 10bn For Youths Empowerment- Atiku

Chatham House: I Was Born In 1952, My Record Is Consistent- Tinubu