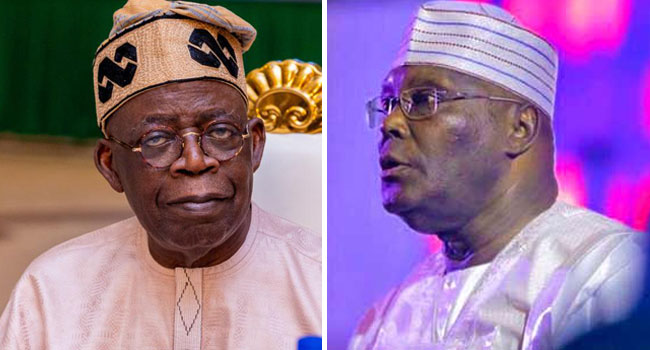 The All Progressives Congress (APC) Tinubu/ Shettima campaign Council has described as a sign of rejection by the citizens the singing of Peter Obi praises in Akwa-Ibom at the PDP and Atiku maiden rally in the 2023 campaign.

Newsonline reports that during the campaign rally for Atiku Abubakar, Peoples Democratic Party (PDP) held on Monday in Uyo, the band group sang Peter Obi songs which the whole crowd echoed with enthusiasm for the Labour Party presidential candidate.

Reacting to what he described as a statement of rejection, the director of social and new media of the Tinubu/Shettima campaign council, Femi Kayode, advised Atiku to drop his presidential ambition.

Kayode said, In the history of Nigerian politics, such a brazen and defiant act of rejection and administration of disgrace has never been dished out to a presidential candidate of a major political party.

“I really do feel sorry for them but I guess you will always reap what you sow. This is a clear case of rejection by the people and a gratuitous insult to the PDP.”

READ ALSO: PDP To Deploy Technology To Monitor 2023 Election Across The Country- Obaseki

Fani Kayode added further, “May I suggest that they drop their quest for the Presidency and instead go into the money-lending, money-changing and money-sharing business? Goodness knows that their National Chairman made away with enough of it.”

He said, “This is a bad omen for them and portends disaster and shame for them in the future and a crushing defeat at the hands of our presidential candidate Asiwaju Bola Ahmed Tinubu and party, the APC, in next year’s presidential election.

He mocked Atiku to drop his ambition and return to Dubai where he lives: “If they can’t command any support in their own rallies why are they wasting their time? Atiku Ibn Dubai should simply give up now and go back to Abu Dhabi. Perhaps he could pull a friendly crowd of supporters there.”

The Spokesman for the APC presidential campaign council, Festus Keyamo also mocked the opposition PDP for stealing of the phone of the immediate former vice president, Namadi Sambo in the Bauchi rally.

Keyamo said, “Just to alert the PDP that no phone was stolen either at the APC rally in Lagos or at the inauguration of the Women’s Wing of the APC Campaign Council in Abuja. We send our commiseration to former VP Namadi Sambo whose phones were stolen at a largely PDP event in Abuja last week.”

Keyamo further questioned the experience of the PDP presidential candidate following his statement in 2014 that as vice president of the country from 1999 to 2007, under the Obasanjo regime he has no personal agenda to execute but that of the president.

Atiku Abubakar had in an interview in 2014 with YIAGA Africa said, “The VP cannot drive change, honestly. A VP executes the president’s agenda as assigned by the president.”

Revisiting the statement of Atiku, Festus Keyamo said, “In 2014, Atiku Abubakar made this confession. It justifies my position that Atiku Abubakar has NO SINGLE achievement in the public sector with which to campaign. He has no right to claim the achievements of his boss, more so as he tried to undermine that boss for 8 years.”

Era Of Election Rigging In Nigeria Has Ended – INEC Declares