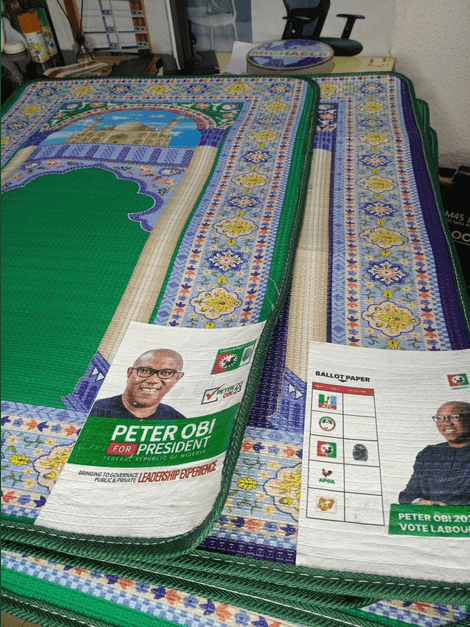 Labour Party presidential candidate and the popular candidate of youths, Peter Obi has cautioned a supporter who posted his picture on a prayer mat.

Newsonline reports that the former governor called on his supporters to uphold his deep respect for the Muslim religion like all other religions in their campaign for his presidency.

Peter Obi stated that the praying mat picture posted on Twitter did not emanate from his campaign or media team.

He stated that he has respect for the Muslim religion and all other religions.

Reacting to the picture, Reno Omokri, a former aide to Goodluck Jonathan said, “This is why I say Christians should compulsorily study IRK and Muslims should do same with CRK. I have read the Quran. This is wrong. Islam does not tolerate images of humans or animals in mosques. Tinubu tried it in Mecca and the Saudis arrested his campaigners!”

The Labour Party candidate, whose attention was drawn to by his grassroots support team advised supporters to respect religious boundaries in their support for the good of all supporters.

Peter Obi said, “The inclusion of my picture on the praying mat by a support group was misguided, even with the best of intentions. It didn’t emanate from my campaign team. I have deep respect for the Muslim faith and indeed, for every other religion.

“We will never mock any faith, ethnicity, or gender. We are one Nigeria.”