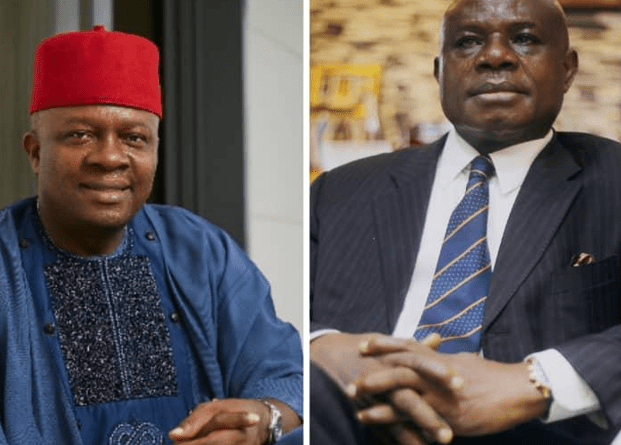 Ozigbo and Chicason Boss have emerged as Anambra Man of the year.

NewsOnline reports that Corporate czar and PDP candidate in the last governorship election in Anambra state, Mr. Valentine Chineto Ozigbo and Anambra’s foremost industrialist and largest employer of labor, Chief Dr. Alexander Chika Okafor OON have at the same time emerged Anambra Man of the Year, 2021. The duo came top in a rigorous voting process that featured about seven other equally prominent and successful nominees.

Anambra Man Of The Year

In announcing them as Man of the Year respectively, the organizers of the prestigious award event said the duo were chosen for being the most impactful and inspiring Anambrarians during the year under review.

In a letter conveying the decision and reasons they were voted by Anambrarians, the organizers stated that Ozigbo was massively voted by Ndi Anambra based on the extraordinary intellect that saw him emerge as the PDP flag bearer despite being a political greenhorn, the carriage and grace he brought to bear on his campaigns, concentrating on issues of governance strictly and shunning avenues of unnecessary name calling throughout the election period. “You came into the race with a spotless reputation and your campaigns were devoid of mudslinging. You focused solely on issues of governance as it affects Anambra State. You have also shown a great spirit of sportsmanship by congratulating the winner of the election immediately the results were announced, a rare attribute of the political class. Indeed, you have shown that you are a breath of fresh air in Nigeria’s political firmament and you should be celebrated for no one lights a candle and places it under a table”. They added.

Anambra Man Of The Year Stats

On Chief Dr. Alexander Chika Okafor, the organizers hinted that he was massively voted for this award by Ndi Anambra based on his extraordinary exploits in the business world, and more importantly, based on how he embodies the think home philosophy, increasing the GDP of the State and creating massive employment opportunities for the teeming youth population. This is a demonstration of his commitment to the economic development of our dear state which is worthy of commendation.

The Anambra Man of the Year Award is a yearly award event which purpose is to accord recognition to the most outstanding Anambra personalities/organizations/brands. This year’s edition is a special edition because it coincides with Anambra @30 anniversary celebration. The award also affords our youngsters a platform to spot the role models they should emulate if they want to reach for the stars in different areas of human endeavor and sustain the light that makes Anambra bright.

Nollywood Actor Sam Obiago Is Dead, Cause Of Death Revealed