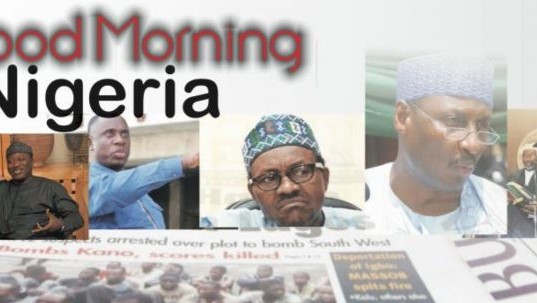 Newsonline has compiled top Naija news headlines from Nigerian newspapers today, this means the latest Naija news, top newspaper headlines and happenings in Nigeria can be accessed on this page.

Below are the top 10 Newspaper headlines & Naija news today from Nigerian newspapers.

1. Over 50 dead bodies have been recovered in villages of Kanam Local Government Area of Plateau State, according to residents. This came as gunmen raided Kukawa, Gyanbahu, Dungur and Keram villages, after which scores of people were killed and over 100 houses set ablaze, according to witnesses.

2. The Minister of Transportation, Hon. Chibuke Rotimi Amaechi, on Monday, visited the Emirs of Kano and Daura over his Presidential ambition. The visit came two days after the minister declared his intention to contest the 2023 presidential election.

3. The National Leader of the All Progressives Congress (APC), Bola Ahmed Tinubu has said Vice President Yemi Osinbajo is not his son. He stated this on Monday in Abuja, in an interview with newsmen shortly after meeting with 12 APC governors.

4. Vice-President Yemi Osinbajo, yesterday, officially declared to contest the 2023 presidential election. He made the declaration in a broadcast he posted via his Twitter handle on Monday morning, hours after meeting with the All Progressives Congress (APC) governors.

5. The Minister of Labour and Employment, Chris Ngige, had a closed-door meeting with members of the Academic Staff Union of Universities, ASUU, in Abuja. It is part of a last-minute move by the Federal Government to end the recurring industrial action by ASUU.

6. The Chairman of the All Progressives Congress (APC) in Atakumosa East Central Local Government Area of Osun State, Gbenga Ogbara, has been shot dead by gunmen. It was gathered that Ogbara was shot dead in his house in Ogangan, in the wee hours of Monday.

7. The Economic and Financial Crimes Commission (EFCC) on Monday arraigned Bolarinwa Abiodun, a fake Army General. Abiodun was docked before Justice Oluwatoyin Taiwo of the Special Offences Court in Ikeja, the capital of Lagos State.

8. A former presidential adviser and chieftain of the ruling All Progressives Congress, APC, in Borno state, Senator Muhammed Abba Aji has advised a national leader of the party, Asiwaju Bola Ahmed Tinubu to shelve his presidential ambition and allow the dreams of his political godson, vice president Yemi Osinbajo to materialize.

9. Elder statesmen in Nigeria, on Monday, said except measures were taken to curtail the trend, widespread insecurity could scuttle the 2023 general election. The elder statesmen, including the President of Christian Association of Nigeria, CAN, Samson Ayokunle and the Sultan of Sokoto, Alhaji Sa’ad Abubakar, raised the concerns during a security dialogue retreat.

10. The Osun State Police Command, on Monday, said military police from Ibadan, Oyo State, have arrested the soldiers involved in the killing of a car dealer, Adeyinka Adekunle, at the Army Barracks, Ibodi, Osun State. Adeyinka, 37, died after he was allegedly tortured by soldiers from the Ibodi Barracks on the orders of one Lt. Tobi Akindapo.