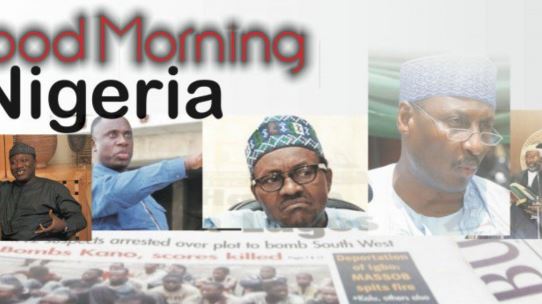 1. The All Progressives Congress, APC, yesterday, dismissed reports that Governor Yahaya Bello of Kogi State has withdrawn support for Bola Tinubu. A statement on Sunday by the APC National Publicity Secretary, Felix Morka said the speculations were maliciously false and a figment of the imagination of its author and sponsors.

2. With barely seven days to sunset for old naira notes, Deposit Money Banks (DMBs) are in panic mode as officials of the Central Bank of Nigeria (CBN) widened their sting operations by discreetly inspecting Automated Teller Machines (ATMs) and banking halls to ascertain their level of compliance to various directives, including loading the newly redesigned notes into the machines.

3. A train enroute the Warri-Itakpe route has derailed, leaving over 300 passengers stranded in a Kogi forest amid public fears for their safety and security. It was learnt that following the incident, the passengers quickly abandoned the train for fear of being kidnapped.

4. There are strong indications that the current fuel crisis across the country may worsen in the days ahead with the introduction of a N16 per liter littering charge. Daily Sun Investigations revealed that the hike in littering charge has forced some filling stations, especially those operated by independent marketers to raise pump price to between N270 and N300 per litre.

5. Anti-sabotage organisation on the aegis of The Natives, has tasked security agencies, especially the Department of State Services (DSS) and the Nigeria Security and Civil Defense Corps (NSCDC) to fish-out oil marketers and other economic saboteurs responsible for fuel scarcity across the country.

6. The Presidential candidate of the Labour Party, LP, Peter Obi on Sunday promised to secure the country and free it from a parallel government by criminals if elected president next month. Obi stated this while addressing supporters in Kano during his Presidential campaign.

7. The Secretary of the New Nigeria Peoples Party (NNPP), North-East zone, Dr Babayo Liman, alongside hundreds of supporters have dumped the party for the People’s Democratic Party (PDP) in Gombe State. The Secretary said he resigned from the NNPP and joined the PDP to support its presidential candidate, Atiku Abubakar.

8. The Central Bank of Nigeria has assured that the introduction of the redesigned new Naira notes would help check the spiralling inflation in the country. The Director, of the Financial Markets Department of the Bank, Dr Angela Sere-Ejembi made this known when she led officials of the bank on a sensitization campaign in Makurdi, Benue State.

9. The youth wing of the ruling All Progressives Congress, APC, Presidential Campaign Council, PCC, has assured that Nigeria and its teeming youth will advance forward under the administration of Asiwaju Bola Tinubu, the APC presidential candidate if elected next month.

10. The National Drug Law Enforcement Agency has arrested a 67-year-old blind grandpa, Aliyu Adebiyi, and a leper, Haruna Abdullahi, for drug trafficking. The Director, Media and Advocacy, NDLEA, Mr Femi Babafemi, in a statement on Sunday, said Adebiyi was caught with 234 kilograms of cannabis.