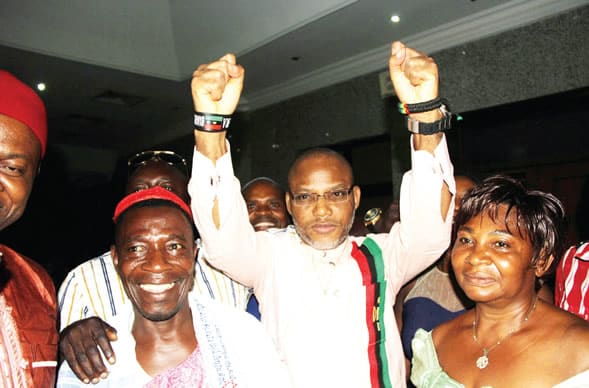 Kanu Legal Team has officially issued a formal notice of release to AGF and DG of SSS.

Newsonline reports that Nnamdi Kanu‘s legal team has issued a formal notice of release to the Attorney-General of the Federation and the Director General of the State Security Service, demanding the immediate release of their client.

The legal team, led by Mike Ozekhome (SAN), issued the formal notice dated October 17, 2022. In the notice shared on Tuesday by IPOB’s lawyer Ifeanyi Ejiofor on his Facebook handle, The team urged the AGF and DG of DSS to immediately comply with the judgment of the Court of Appeal.

Newsonline recalls that on October 13, the Appellate court discharged Mr Kanu of the remaining charges against him.

What the lawyers are saying

In the final formal notice of release which was attached with a copy of the Appellate court’s judgment, the legal team urged Abubakar Malami and the DG of the State Security Service to refer to the judgment and release their client immediately.

Part of the notice by Kanu’s legal team said, “recall that Mazi Nnamdi