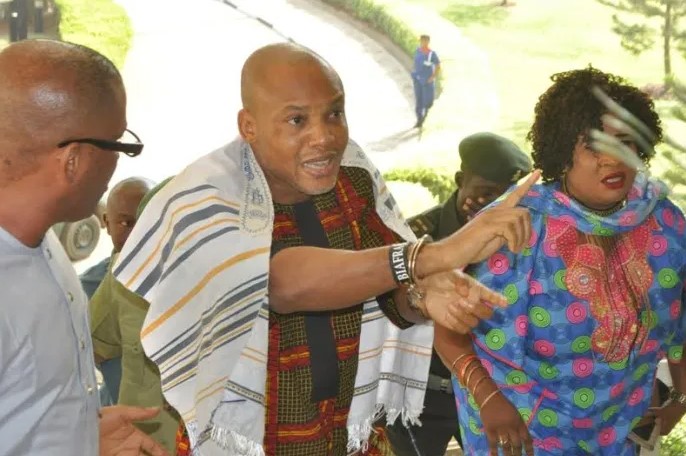 Delivering the lead judgement on October 13th, Justice Oludotun Adebola ruled that the Federal Government breached all local and international laws in the forceful rendition of Kanu to Nigeria thereby making the terrorism charges against him incompetent and unlawful.

The justices voided and set aside the charges by the Federal Government against Kanu.

The Appellate Court proceeded to discharge Kanu from the alleged offences.

Justice Adebola held that the failure of Nigeria to follow due process by way of Extradition was fatal to the charges against Kanu.

They further held that the failure of the Federal Government to disclose where and when the alleged offences were committed was also fatal to the terrorism charges and made them liable to dismissal.

But in a memo dated October 17th, which was signed by the President of the Court of Appeal, Justice Monica Dongban-Mensem, the three justices were moved from their various divisions.

The memo emphasized that the new posting for the justices was with immediate effect and that they were expected to report to their new stations by October 21.

According to the memo, the presiding justice, Jummai Hanatu Sankey, who previously was in the Gombe Division of the court, has been transferred to Awka Division, whereas Justice Oludotun Adetope-Okojie who delivered the lead judgement, was moved to Owerri, while Justice Ebiowei Tobi, the third member of the court panel was transferred to Gombe.

What are the reasons why Kanu was arrested?

Nnamdi Kanu was first arrested on 14th October 2015 by the Federal Government when he was charged with 11 allegations, which includes; improving terrorism, controlling unlawful community, reporting slanderous matters, unlawful possession of weapons, unlawful import and many more.

He spent two years in police custody but was later released in April 2017 on bail.

He was illegally abducted on the 27th of June 2021 from Kenya and the Nigerian government accused him of enhancing and encouraging violence through his post, television and Biafra radio talk show.

According to Ejimakor, Kanu cannot be lawfully prosecuted by the federal government of Nigeria unless the issue of his extra-ordinary rendition is first discharged, and if he is to stand trial in Nigeria, he will first be returned to Kenya and Britain where he resides before Nigeria will apply for his extradition in a British court.

2023 Election: Whoever Hired Reno Should Count His Loses- MrP (Psquare)