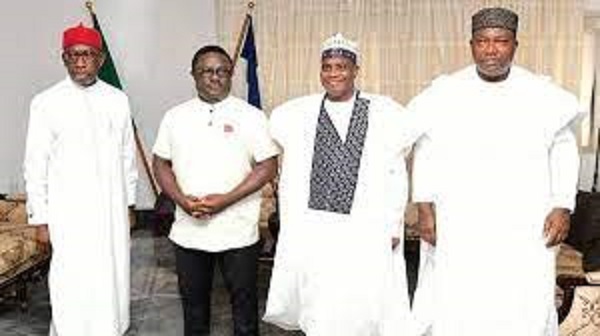 News Online reports that this is unconnected to the arrival of All Progressive Congress (APC) Governors in Calabar, capital of Cross River to persuade Governor Ben Ayade to defect from the Peoples Democratic Party (PDP) Wednesday night.

All Progressive Congress (APC) Governors arrived in Calabar barely two weeks after a delegation of Governors Forum of the PDP visited to dissuade him from leaving the party.

The APC delegation was led by Yobe Governor Mai Mala Buni, who is also the National Caretaker Committee chairman of the APC.

Buni arrived Calabar on Wednesday evening to join his Imo counterpart, Governor Hope Uzodima who had been on ground.

Ebonyi Governor Dave Umahai and a number of other Governors of the APC are also expected to arrive the state.

They are currently having a meeting with Ayade in the State Executive Chambers to perfect his defection.

According to sources who spoke to News Online,  the Governors will also meet with some stakeholders of Cross River politics on the benefits of joining the ruling party.