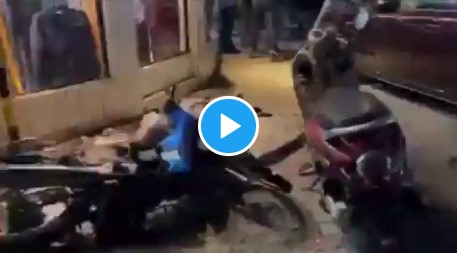 A bomb blast has exploded in a Former President’s residential home.

News Online reports that former Maldives President and current Parliament Speaker, Mohamed Nasheed, has been hospitalized after a bomb exploded outside his family home on Thursday.

According to Aljazeera, a police statement revealed that Nasheed sustained injuries and is currently receiving treatment at ADK Hospital following the explosion.

The Police, however, failed to give details of the injuries suffered by Nasheed but revealed that at least one of his bodyguards was also taken to hospital.

“Following an explosion Speaker of Parliament President Mohamed Nasheed has sustained injuries and is currently receiving treatment at ADK Hospital.

“The explosion went off on Thursday as he was getting into his car in the capital Male.

“Investigations are under way to find the culprits behind the attack,” the statement said.

Also, the country’s Foreign Minister, Abdulla Shahid in a statement via his Twitter account strongly, condemned the attack.

Breaking: Abuja Schools Shut Down As Bandits Arrive In Truckloads

“Cowardly attacks like these have no place in our society.

“My thoughts and prayers are with President Nasheed and others injured in this attack, as well as their families,” he said.

BREAKING: Maldives Speaker of Parliament and Former President Mohamed Nasheed has been rushed to ADK Hospital after an explosion went off as he was about to enter his car pic.twitter.com/ZVgwW98Pua