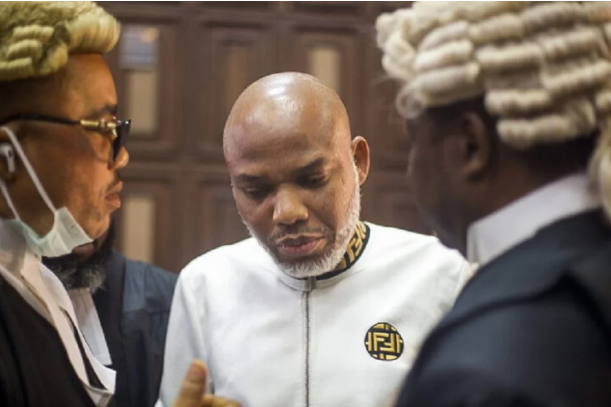 Knocks and controversies have thrilled FG’s continuous detention of Nnamdi Kanu ahead of the 2023 general elections.

NewsOnline reports that President Muhammadu Buhari has been slammed over the issues surrounding the leader of the Indigenous People of Biafra, IPOB, Mazi Nnamdi Kanu and his continued detention by the Federal Government.

Despite the ruling by the Court of Appeal for the IPOB leader to be released, the Buhari administration stood its ground. It later approached the same court and got a stay of execution.

The Court of Appeal in Abuja had held that the Federal Government breached all local and international laws in the forceful rendition of Kanu to Nigeria, thereby making the terrorism charges against him incompetent and unlawful.

But the Attorney General of the Federation, AGF, Abubakar Malami had vowed that Kanu would not be released despite the court ruling, insisting that the Federal Government would pursue other charges against Kanu.

This is despite the likes of Ohanaeze Ndigbo, elder statesmen such as former Governor of Anambra State, Chukwuemeka Ezeife, the late Mbazuruike Amaechi, Chief Edwin Clark among other prominent groups and individuals calling for adherence to the court ruling.

Also some rights groups such as the International Society for Civil Liberties and the Rule of Law (Intersociety) had knocked the Attorney General of the Federation and Justice Minister, Abubakar Malami, over the development.

Comrade Emmanuel Onwubiko of the Human Rights Writers Association of Nigeria, HURIWA, told Buhari that the continued detention of Kanu, would be viewed as kidnapping and would spike other forms of violence in the South East.

HURIWA further accused Malami of acting the script of Miyetti Allah Cattle sellers, insisting that Buhari must stop playing what it described as the toxic Northern ethnic card and obey the court verdict that discharged the IPOB leader.

“Any further detention of Mazi Nnamdi Kanu would amount to active hostage taking and an outright criminal case of kidnapping which is actionable. We wonder why a lawyer of Malami’s illustrious status adorning the title of a Senior Advocate of Nigeria is now speaking like a one hundred-level law student of one road-side law faculty in a corner of Nigeria,” Onwubiko said.

He added that, “The Federal Government had rushed to the Appeal Court after the Federal Attorney General and minister of justice, Abubakar Malami had used media platforms to impugn and discredit the panellists who freed Kanu.”

Many other people still believe that Kanu’s release would restore peace in the South-East.

“In other democracies, when a court gives its ruling, the government or whoever it affects follows it up immediately. But that’s not the case in Nigeria. One thing the Buhari government is known for is its total disobedience to the rule of law. A court gave an order but instead of obeying the court ruling, they’re busy transferring the judges that gave the ruling and installed those that will do their bidding,” a security expert and senior lecturer in one of the Federal Universities told DAILY POST

“People living and doing businesses in the South East are forced to sit at home every Monday and I don’t how this is helping Malami and the Buhari government.

“But just as it has been said, it appears this government does not want peace in the South East. It’s looking like they want the region to be destroyed. If that’s not the case, tell me why Nnamdi Kanu has been detained despite the court order.

“I know the APC and some people in the Buhari government want to use the situation to their own advantage. The plan is to keep the South East in crisis with the continued detention of Nnamdi Kanu so that the people would be scared to come out to cast their votes or participate fuller in the election activities. They know that the South East is the stronghold of the Labour Party candidate, Mr. Peter Obi,” he added.

2023: Peter Obi Opens Up On Plan For IPOB, Other Agitators