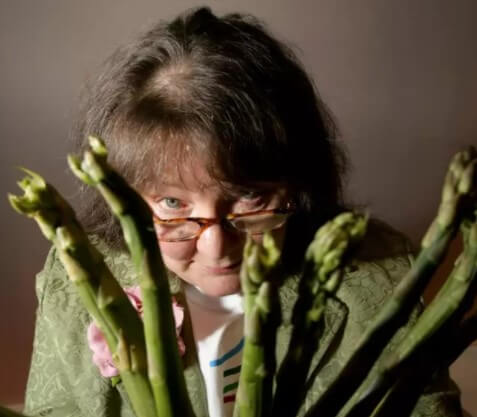 Woman Who Uses Asparagus To See Future Has Releases 2021 Predictions.

NewsOnline Nigeria reports that a woman who claims to be able to predict the future by flinging asparagus about has released her predictions for 2021.

This online news medium understands that Psychic Jemima Packington, from Evesham, has earned herself the nickname ‘Mystic Veg’ because instead of your usual tarot cards or crystal ball she ‘reads’ asparagus tips.

What President Buhari Did To Father Mbaka “Yesterday, Tomorrow”

In the past, Jemima says she’s correctly predicted Brexit, Harry and Meghan leaving the UK and flooding in England, shortly before Storm Eleanor arrived in 2018.

Speaking about her unusual talent, she said: “I’m able to interpret the patterns left by the asparagus.

“When I cast the asparagus, it creates patterns and it is the patterns I interpret.”

The 65-year-old has now given her predictions for the upcoming year, including what’s going to happen next with the coronavirus pandemic; how things are looking for the royal family; and what we can look forward to in world politics.

Speaking to the Mirror, Jemima said: “Although the impact of Covid-19 will still be felt around the world, the vaccines will bring a return to the new normal by June 2021, although not a return to pre-pandemic days.”

She also says people will become ‘kinder and more tolerant’ as a result of living through the pandemic – which would be nice if true.

Elsewhere, she predicts Harry will return to the UK on his own in March and that the Queen has a big announcement to make in June.

Jemima reckons it’s not just the royals who are in for a run of bad luck, either – talking about politics, she said: “Former President Trump will be disowned by GOP members because of his appalling handling of the US domestic situation.

“He will not stand for a further term as President and his future is uncertain.”

She also ruled out a second Scottish independence referendum.

She also added: “Big salaries for sports stars and the obsession with celebrities will become things of the past – the era of semi-professional sportsmen will re-emerge along with a focus on real heroes.”