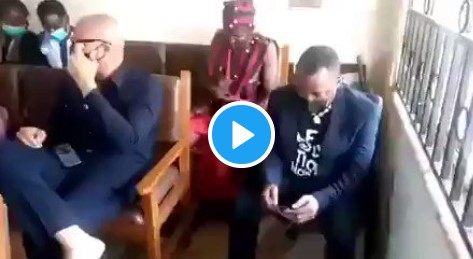 NewsOnline Nigeria reports that Popular activist and the Covener of #RevolutionNow, Omoyele Sowore has sparked reactions after he stormed the court with a traditional spiritual adviser who was seen performing Abracadabra.

While in the courtroom, the spiritual adviser who was dressed in herbalist attire was seen doing some incantations and actions that look like a ritual to make Sowore get a favourable judgement.

This move by Sowore has sparked several reactions. Some see it as funny, while some outrightly condemned it

Just when you thought you have seen it all, then this…..?

This is not a movie scene guys, here is Omoyele Sowore at an Abuja court with his legal adviser and personal 'babalawo'' ( spiritual adviser) 😃#nollywoodturnsreality #BetterTogether pic.twitter.com/XCe1JIWM1Y