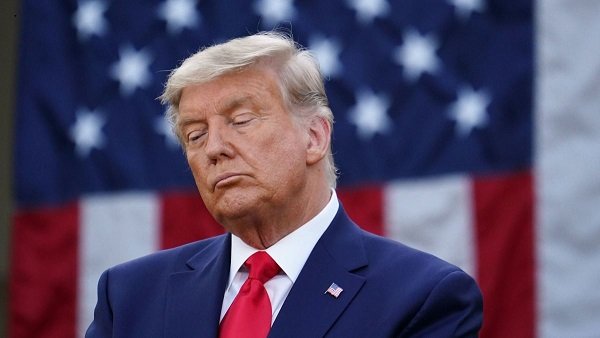 Trump Has Returned To Supreme Court To Cancel Pennsylvania Election.

NewsOnline Nigeria reports that embattled U.S. President Donald Trump is unrelenting in his pursuit of court help to overturn the election of President-elect Joe Biden.

This online news medium understands that Trump’s latest gambit is a new petition seeking to reverse a trio of Pennsylvania Supreme Court cases having to do with mail-in ballots.

MUST-READ: US Bans Citizens From Travelling To 12 States In Nigeria (Full List)

But the move may end up as a “campaign after an election” as the justices are not scheduled to meet again, even privately, until Jan 8, two days after Congress counts votes of the electoral college.

Trump through his lawyer, Rudy Giuliani wants the court to reject voters’ will and allow the Pennsylvania General Assembly to pick its own slate of electors.

While the prospect of the highest court in the land throwing out the results of a democratic election based on unfounded charges of voter fraud is extraordinary unlikely, it wouldn’t change the outcome.

President-elect Joe Biden would still be the winner even without Pennsylvania because of his wide margin of victory in the Electoral College.

“The petition seeks all appropriate remedies, including vacating the appointment of electors committed to Joseph Biden and allowing the Pennsylvania General Assembly to select their replacements,” Trump attorney Rudy Giuliani said in a statement.

He is asking the court to move swiftly so it can rule before Congress meets on Jan. 6 to tally the vote of the Electoral College, which decisively confirmed Biden’s win with 306 electoral votes to Trump’s 232.

Pennsylvania last month certified Biden as the winner of the state’s 20 Electoral College votes after three weeks of vote counting and a string of failed legal challenges.

Trump’s campaign and his allies have now filed roughly 50 lawsuits alleging widespread voting fraud. Almost all have been dismissed or dropped because there is no evidence to support their allegations.

Trump has lost before judges of both political parties, including some he appointed. And some of his strongest rebukes have come from conservative Republicans.

The Supreme Court has also refused to take up two cases — decisions that Trump has scorned, dismissing the judges as ‘lacking wisdom and courage’.