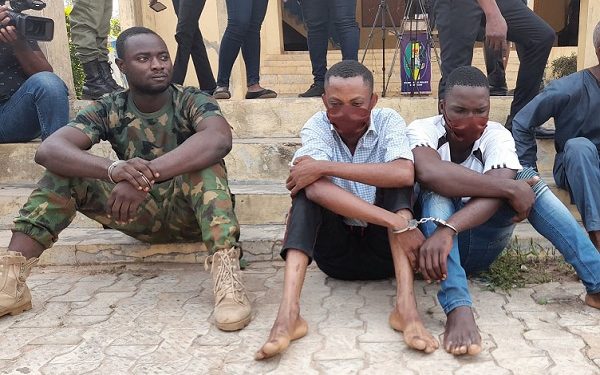 Soldier, Police Officer among Other Suspects Have Been Arrested For Armed Robbery In Ondo State.

NewsOnline Nigeria reports that a newly recruited police constable David Friday has been taken into custody for alleged armed robbery.

This online news platform gathered that Mr Friday was attached to Olofin Police Station in Idanre council area of Ondo State when he was arrested alongside others.

One of the suspected suspects is a soldier, Innocent Victor, serving with the 32 Artillery Brigade, Nigeria Army, Owena Cantonment.

They were reportedly armed with a Jack knife and other dangerous weapons at Ojadale Junction where they reportedly attacked and robbed some persons.

“He was being tried for that motorcycle theft when he was caught conspiring with a soldier to rob some people with a dagger. We paraded them and the victims identified them. Other victims came and identified them. When we are done with our investigation, we will charge them to court.”

The soldier denied involvement in the allegation, saying he stepped back at the scene of the incident.

He said he was held for being on illegal duty. Friday also denied robbing anybody.

Other suspects paraded were one Wasiu Lateef who allegedly defiled a teenager at an uncompleted building in Lapanu village, and a suspected teenage kidnapper, Bello Ali, who could not explain what he was doing in a forest between Uso and Ogbese.

A fake soldier, Desmond Ikechukwu, who impersonate the Army to intimidate members of the public was also paraded. Ikechukwu who confessed that he was not a soldier said he wore the uniform to a bar when he was arrested.