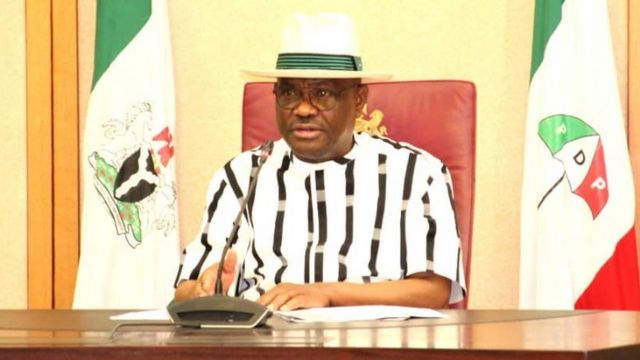 Governor Nyesom Wike stated in his speech early with Primate of the All Nigeria Anglican Communion, Most Rev. Henry Chukwuka Ndukuba led a delegation of the Church to visit him at the Government House, Port Harcourt that those agitating for secession to drop their demand and join persons clamouring for a restructuring of Nigeria.

In a statement signed by the governor’s Special Assistant, Media, Kelvin Ebiri, Wike disclosed that the people of Rivers State had lived peacefully with Nigerians from other parts of the country.

He regretted that criminal under the aegis of the outlawed, Indigenous Peoples of Biafra (IPOB), misconstrued the peaceful disposition of the state to carry out treasonous activities like hoisting their flags in Rivers community.

According to the governor, the state was peaceful during the #EndSARS protest, until IPOB members unleashed unprovoked attacks that killed six soldiers, four policemen, and destroyed all police stations and court buildings in Oyigbo.

While dismissing allegations that he ordered soldiers to attack Igbo people living in Oyigbo, Wike said if he had not imposed a curfew there would have been a bloody confrontation between Hausa and Igbo communities.