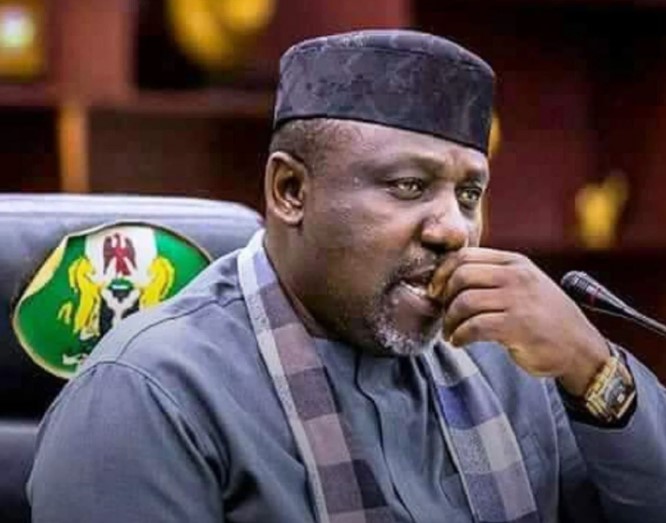 Former Imo Governor, Senator Okorocha Has Been Arraigned In Court By Police.

This online news platform earlier reported that Okorocha and about 19 others, were arrested Sunday evening by the police, but only 14 persons were however, arraigned in the Magistrate Court on a six-count charge, vide suit number OW/80C/2021.

The charge sheet, which was signed by the O.C Legal/Prosecution Unit, Imo State Police Command, Mr. M. A. Omo-Osagie, a superintendent of police, specifically charged Olu Chizoba of unlawfully possessing one Italian made double barrel pump action gun, without license from the issuing authority.

The charge read: “That you, Olu Chizoba, on the 21st day of February, 2021, at about 1700 hours,in the premises of Royal Spring Palm Hotel and Apartment, in the Akachi Area of Owerri Municipal, in the Owerri Magisterial District, did unlawfully had in your possession, one Italian made double barrel pump action gun, with breach number number 6546, without license from the issuing authority, contrary to Section 3 and punishable under Section 27(1)(iv) of the Firearm Act Cap F28 Laws of the Federation of Nigeria 2004, as applicable in Imo State.”

Similarly, Ibekwe Darlington was accused of publishing a recorded defamatory matter on social media, with intent to injure the reputation of the state government and the person of Governor Hope Uzodimma, “by exposing him to hatred, contempt, ridicule and to damage his reputation and thereby committed an offence punishable under Section 375 of the Criminal Code, Cap C38 Laws of the Federation of Nigeria 2004, as applicable in Imo State.”

The suspects and “Ebuka, surname unknown and others at large, including Chief Uche Nwosu, Chief Las Okafor Anyanwu, Dr. Uzoma Anwuka and Ijeoma Igboanuni, on the same date, time and place, in the aforementioned Magisterial District, willingly and unlawfully destroy the official seal of Imo State Government, one big padlock and chain valued at N35,000, used to seal Royal Spring Palm Hotel and Apartment, property of Ministry of Lands, Survey and Physical Planning, Imo State, and thereby committed an offence punishable under Section 451 of the Criminal Code, Cap C38 Laws of the Federation of Nigeria 2004, as applicable in Imo State.”

The accused persons denied the charges levelled against them, while their defence counsel quickly moved an oral motion for their bail.

Midway into the delivery of the ruling on their bail, Ibekwe Darlington slumped in the dock, but the act did not stop the presiding Magistrate, Mrs. B. U. Adikibe, from completing her ruling.

Each of the accused persons were granted bail on the sum of N5 million, while a traditional ruler or the member representing their respective state constituencies, should stand as sureties for them.